Co-published by the Daily Beast

Astrid turned 15 years old last week, but she spent her birthday not at the quinceañera she had been planning for months, but surrounded by strangers at a detention facility in rural Pennsylvania for immigrant families seeking asylum. Astrid and her father, Arturo, have been held there for a month now. She’s the only teenage girl in the lockup.

“This girl and her father were sleeping in their beds when they were woken up by ICE agents,” recounted Carol Anne Donohoe, the family’s pro bono attorney, referring to Immigration and Customs Enforcement. “It doesn’t sound like there was any due process, any warrant — anything,” she added in an interview. “The total lack of respect for the law that this agency is showing, it’s like open season on immigrants. It’s terrifying, and it’s terrifying entire communities.”

Astrid and Arturo (they requested that their last name not be mentioned) came to the United States in February 2015, fleeing state and non-state violence in Guatemala. They are members of the indigenous K’iche’ community, which faces the threat of displacement and abuse, often at the hands of their own government. Three years later, on February 20, they were arrested by immigration agents in their new home of Easton, Pennsylvania, where Astrid attended eighth grade at the Easton Area Middle School.

“This is a kid who was picked up expecting to go to school the next day, like normal, and instead she’s in this detention center,” Donohoe said. “It’s mind-boggling to me that someone made a decision to detain a 15-year-old girl.”

Astrid now shares a cell with her father. At night, a guard comes by every 15 minutes to check on them; some guards are more disruptive than others, according to Donohoe, who says that during the day, “[Astrid’s] in a classroom for kids 12 and up.” Many of those children are new to the country and do not speak English; a few only speak the indigenous K’iche’ language. Teachers stick to the ABCs, sometimes asking Astrid to translate for them.

“How on earth is that looking out for children?” Donohoe asked. Astrid, she added, spent last week trying to forget about her birthday. Some law students brought her cupcakes and nail polish, and some of her teachers came up from Easton to bring her a few cards.

Astrid and Arturo are being held in the Berks County Residential Center, a nondescript brick compound a 90-minute drive northeast of Philadelphia. The facility has been has been in operation since 2001, but saw its numbers swell back in 2014, when the Obama administration responded to a major uptick in refugee arrivals from Central America — over 28,000 unaccompanied children and nearly 20,000 families were apprehended that year — by expanding the practice of detaining immigrant families seeking asylum. In 2015, a federal judge ruled the practice “deplorable,” and illegal. More families were then allowed to pursue their asylum claims in freedom, but the practice did not end. 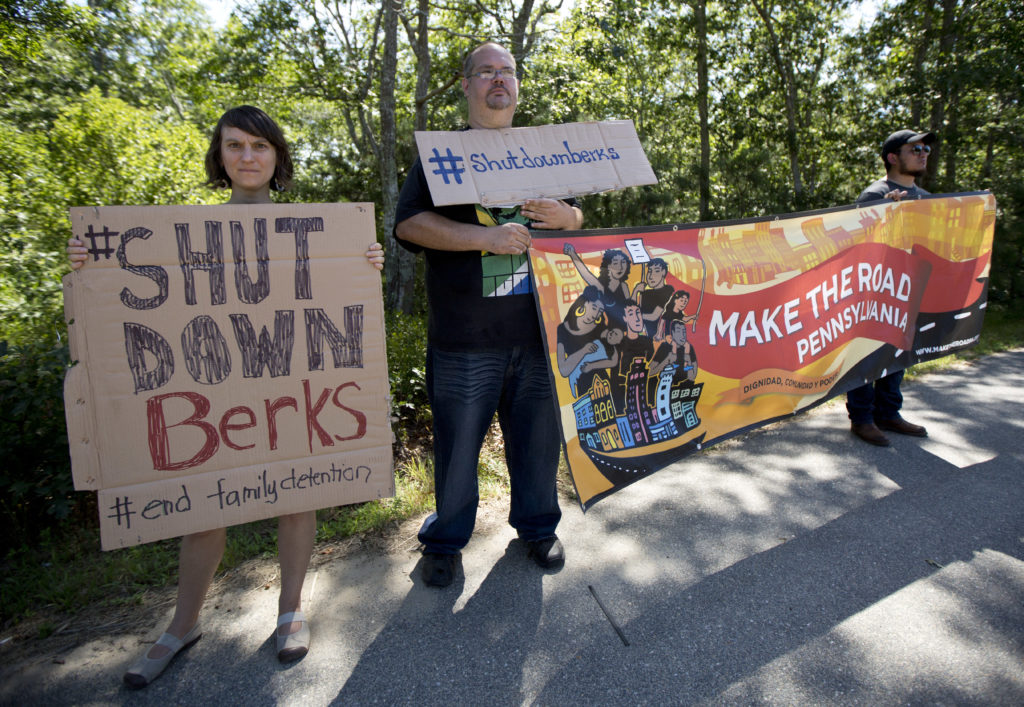 “We cannot send a message that once families with kids cross the border, they are here to say,” a senior official at the Department of Homeland Security told The Washington Post in March 2016.

President Donald Trump inherited this system, and in February 2018 the Supreme Court ruled that even immigrants with permanent legal status can be detained indefinitely. But he has made it even more punitive — a Congolese mother was separated from her 7-year-old daughter for 16 weeks, according to a lawsuit — and he’s made it so families seeking asylum on the outside of a detention facility no longer benefit from being ICE’s lowest priority.

Now anyone who lacks secure legal status will routinely be detained in an ICE raid, even if they are not the target — even if they have a math quiz the next day. Donohoe said her clients are treated even more like criminals than they were before, their refugee hearings closer to interrogations than impartial interviews, staff taking their cues from the country’s leadership.

“This administration has made everyone a target,” Donohoe said, “and everyone in the country is going to be feeling consequences of that.”

Arturo and Astrid already have, experiencing first-hand the impact of a 30 percent surge in ICE arrests during Trump’s first year in office. Their case has attracted the attention of Amnesty International, which is calling for their release.

“It’s a jail in Pennsylvania that’s being used to imprison children,” said Sheetal Dhir, a senior campaigner with the human rights group. “It’s pretty unfair.” And for many of those detained, it won’t necessarily get any better when they get out. “If these families are forced to go home, they are facing incredibly dangerous situations — even death, upon their return.”

Adrian Smith, a public affairs officer with ICE’s Philadelphia field office, said in a statement that Arturo was “unlawfully present in the U.S.” and that “his immigration case is ongoing.” ICE did not comment on the detention of his daughter.

ACLU to Greyhound: Keep Border Patrol Off the Bus

Deadly Detention: Self-Portrait of a Tragedy