Three months after Hurricane Ida made landfall in the parish adjacent to Albert Naquin’s home in southern Louisiana, the 75-year-old chief of the Isle de Jean Charles Biloxi-Chitimacha-Choctaw is thankful that the tribe is still holding its head above water, “at least from the nose up.” Ida wiped out all but one of the 25 homes of tribal members still living on the Isle de Jean Charles, he says, and their friends in the neighboring Pointe-au-Chien Tribe were hit just as hard.

Theresa Dardar, a Pointe-au-Chien tribal member who helped establish a supply distribution center within days of the storm, says most of their displaced folks are elderly, and it’s hard for them to start over. “But they have to. Everything’s gone.” Naquin’s tribe has lived in the area since the 1830’s, when they were forced by the U.S. government to move west of the Mississippi. The Pointe-au-Chien are native to these parts.

Now, they worry that their efforts to restore their communities will be threatened by new oil and gas drilling just offshore of Terrebonne Parish, after leasing was just reopened in the area by the Biden administration. During the auction on Nov. 17 conducted by the Bureau of Ocean Energy Management (BOEM), energy giants such as BP, Chevron and ExxonMobil bid over $198 million for the right to drill on 1.72 million acres of seafloor in the Gulf of Mexico.

In 2017, the U.S. Department of the Interior estimated that the lease sales could lead to the production of up to 1.12 billion barrels of oil and 4.42 trillion feet of gas. If burned, 516 million metric tons of greenhouse gases will be released, an amount equivalent to “112 million cars, 130 coal-fired power plants operating for a year, or the carbon sequestered by 632 million acres of forests,” according to Earthjustice.

Naquin’s deputy chief, Wenceslaus “Boyo” Billiot, says the sale is “a wave coming to destroy us some more.”

Since the BP spill in 2010, which devastated the island’s fishing economy, some tribal members have been squeezed into an ever more complicated relationship with industry. Facing depleted harvests, many tribal workers who’d previously fished oysters have turned to working on boats, often as welders, in service of the very industry despoiling their waters — an estimated 350 oil spills in the Gulf occurred during Hurricane Ida alone, including one that was over 12 miles long.

There are 26,600 miles of active and no-longer-used offshore oil and gas pipelines along the seafloor in the Gulf alone, according to the Government Accountability Office, and whether the spills emanated from active or decommissioned pipelines is still unclear.

“I used to hate them, now I gotta be one of them,” says Theresa’s younger brother Tommy Dardar, a second-generation former oyster fisherman. Others in the community, with their shoulders to the double axes of survival and rebuilding, were unaware that the sale had even occurred. But for those who’d tracked it with the escalating anxiety with which one tracks a tropical depression evolving to a Category 4 hurricane like Ida, the primary emotion of watching the lease sale go through was “agonizing.”

The lease sale took place just two weeks after President Biden’s return from the COP26 climate summit in Scotland, and only one day before he laid out his policy commitments to Native Americans in a five-point program that includes a “new initiative to increase tribal participation in the management and stewardship of federal lands” and another “to comprehensively incorporate tribal ecological knowledge into the federal government’s scientific approach, helping us fight climate change.” Those policies and the goal of a green economy directly conflict with the approval of new drilling in the Gulf, say environmental advocates — and the tribes can’t help fearing for their future.

Why Did the Biden Administration Allow the Sale?

Under a harvest moon, as sage and sweetgrass was burned in a smudging purification ritual during the annual American Indian Mass of Thanksgiving held on Nov. 19 in Pointe-aux-Chenes, many tribal members prayed to the four cardinal directions for wisdom, gentleness, forgiveness and courage.

It was also a moment of communal reflection on their losses from Ida, both from the storm itself and the state government’s lackluster response to the needs of the community. Naquin says they’ve been scrambling to buy trailers and campers for people who are trying to clear their properties of debris and salvage what they can, but that attempting to stretch around $25,000 in donations when there’s a need for 52 campers is not humanly possible. 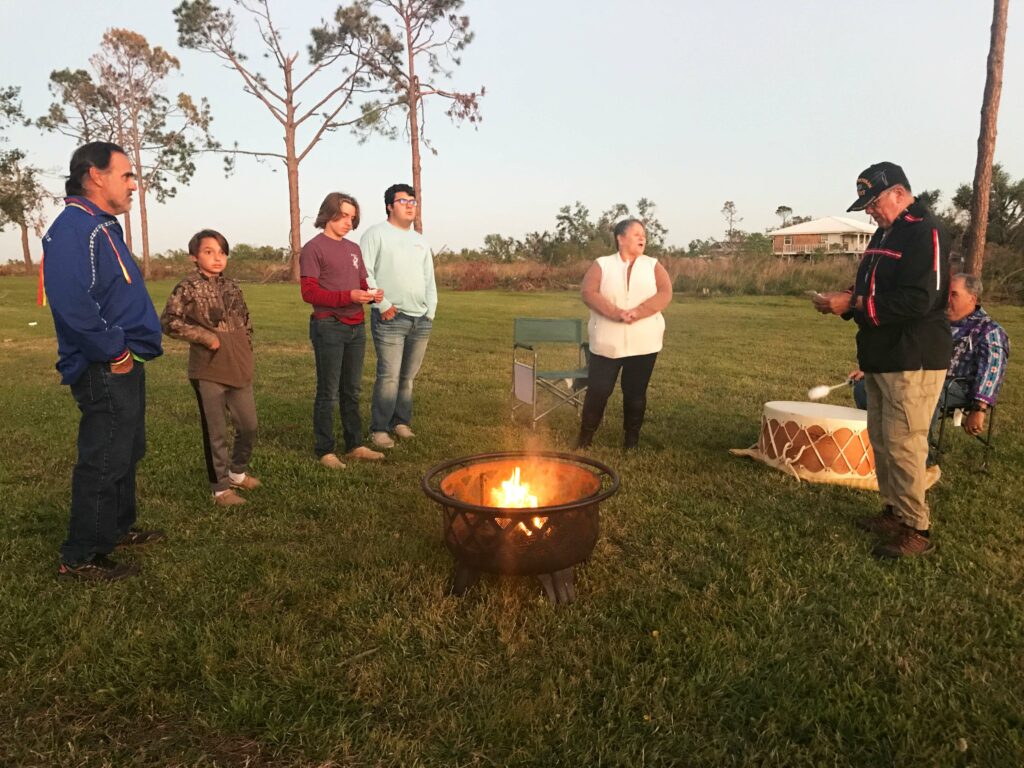 Theresa Dardar says that the Federal Emergency Management Agency payouts some tribal members received are not enough to cover the cost of demolition and roof replacement. “One lady only got $4,000. She has to tear down even the stilts her house was on, because they shifted. Everything has to come down. So, $4,000,” Dardar reports. “What can she do with $4,000?” The tribe is not federally recognized, though they are by the state of Louisiana, which renders them “out of the picture for federal aid,” she says. “I tell people all the time, we’re the forgotten people.”

At the meal after mass, the fortunate few whose losses were manageable ate seafood gumbo and fry bread side by side with those who’d lost every material thing they’d had in life. Some members who’ve been regular attendees were missing from the gathering, and their absence was dearly felt. Both tribes are scattered and under duress: Some members are sleeping in tents pitched under their former homes or bunking with relatives in crowded houses of 14 or more; others’ whereabouts are simply unknown. “Our people are uprooted, while Biden sleeps,” lamented Billiot. “Did you see the video from COP26?”

The lease auction, held two days before the mass, went forward based on an injunction issued in June by U.S. District Judge Terry Doughty, a Trump appointee. His ruling blocked an executive order signed by Biden just a week after his inauguration on Jan. 27, 2021, that banned the issuance of new oil and gas leases on federal land and water, known as “the pause.”

Though the Department of Justice has filed an appeal to reinstate the pause, some experts say that the administration could have done more to circumvent the ruling. Megan Milliken Biven, a former BOEM analyst who now envisions a future in which former oil and gas workers will be hired directly by the government to identify, clean and plug abandoned wells in Louisiana, says Biden’s capitulation to the terms of the injunction was a classic example of “Do as I say, not as I do.”

“It was an obscure injunction in administrative law,” Biven explained, “one of the weakest injunctions, and so easy to fight.”

A spokesperson for the Interior Department said that the agency is complying with the court decision while appealing it, and is taking various steps to better manage its climate footprint, including a more “comprehensive analysis of greenhouse gas impacts from potential oil and gas lease sales than ever before.”

Noting that these wells may not produce oil and gas for years — the leases are broken into five- or 10-year blocks — Biven explained that this sale was not primarily about increasing oil supply to combat rising gasoline prices, a commonly held opinion based on Republican talking points. Rather, she claims it’s an accounting mechanism designed to put an asset on industry’s corporate books. “That term ‘proven reserves’ says that Chevron, Shell, Exxon are worth this amount.”

She blames both parties for holding Americans hostage to an environmentally catastrophic status quo. “People talk about how the Republicans are the dogs of oil and gas. Well,” she says, “Democrats are the dogs of banks and insurance companies who are extremely exposed to these investments, and the only way to create value is to keep it rolling.”

The auction also prompted a lawsuit filed by Earthjustice on behalf of Healthy Gulf, Sierra Club and the Center for Biological Diversity— its premise is that the underlying authority for oil and gas development in the Gulf derives from a 2017 Environmental Impact Statement (EIS) that remains outdated in light of subsequent climate disasters and oil worker fatalities. Though the suit did not succeed in halting last week’s sale, its legal arguments may yet compel U.S. Secretary of the Interior Deb Haaland, who is trained as a lawyer, to pause new lease sales in the Gulf, at least until a Supplemental EIS can be issued, a process that often takes years.

“The International Panel on Climate Change has been clear there should be no new drilling in the Gulf.”

Critics of the sale say that more research needs to be done on the environmental impact to the Gulf wrought by Hurricanes Laura, Delta and Zeta in 2020 and Ida in 2021, as well as the revelations detailed in a March 2021 GAO report on the hazards of decommissioned pipelines. The discovery of toxic waste barrels of DDT in the Mississippi Canyon, last spring’s Seacor Power disaster in which six workers are known to have died and seven others are presumed dead, the Deepwater Asgard safety scare during Hurricane Zeta last year, the failure to evacuate workers on the Noble Globetrotter II during Hurricane Ida — all of these incidents and more need to be factored into an EIS that can prudently guide oil and gas development in the Gulf, they claim.

A wider network of advocates protested the lease sale at the Superdome in New Orleans and in Washington, D.C., on Nov. 15, and delivered over 100,000 petition signatures to Biden demanding that he cancel it. Jane Patton, plastics & petrochemicals campaign manager for the Center for International Environmental Law, said “the International Panel on Climate Change has been clear there should be no new drilling in the Gulf, and that no new fossil fuel infrastructure should be built out in order to avoid climate catastrophe.”

Raleigh Hoke, a campaign director at Healthy Gulf, agrees that Louisiana’s coastal communities cannot afford a polluting economy and this offshore lease sale “is just kind of taking us deeper into that hole.”

Yet Hoke, who’s been at this work in Louisiana since 2007, also holds out hope, noting that there’s been a sea change in awareness and action.

“Most of the coastal parishes are involved in lawsuits to hold the oil and gas industry accountable, and it was unheard of under the Obama administration to even consider pausing offshore leasing in the Gulf of Mexico. The Biden administration did pause it, and although they did move forward with this lease sale, the conversation has completely changed.”