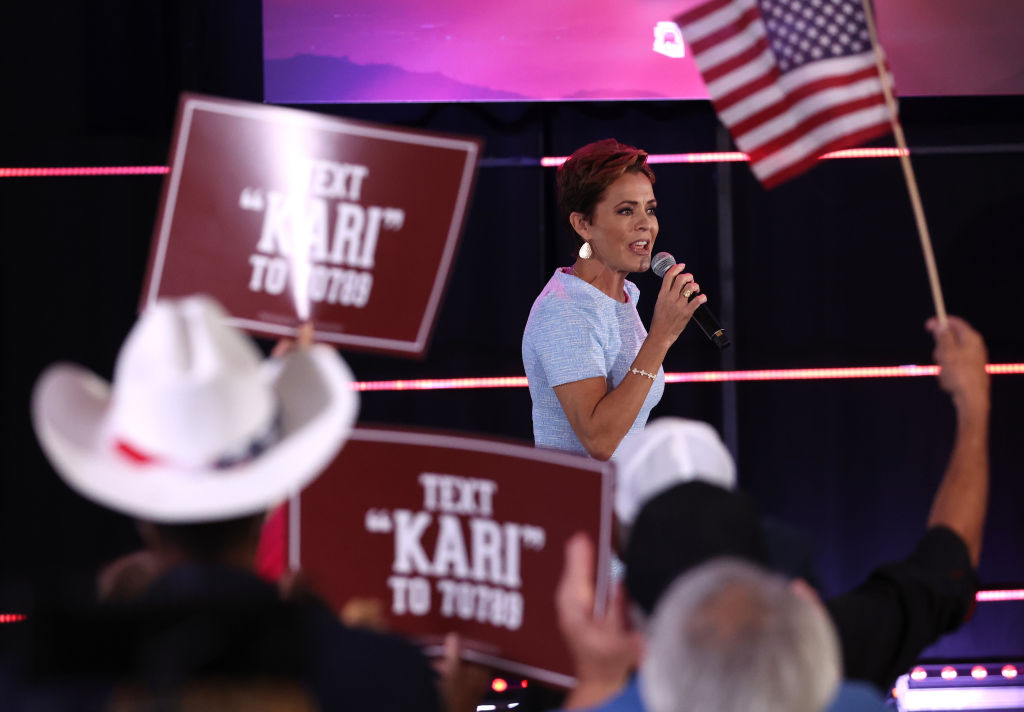 Kari Lake, the former television news anchor running for Arizona governor, has made casting doubt on the results of the 2020 election a recurring campaign theme. Lake says she would not have certified the 2020 election for Joe Biden in spite of the fact that multiple lawsuits and reviews uncovered no evidence of significant voter fraud.

In a state that has been called ground zero for Republicans’ attempts to subvert elections, the prospect of her election and that of the other election deniers running for office in Arizona is causing dread among those who believe U.S. democracy is under siege. So is news of poll watchers monitoring drop boxes, some of them armed and wearing Kevlar vests. But while many Arizona voters are worried by the prospect of a Lake governorship, many who decide elections — swing voters and infrequent ones — are not motivated by the threat to democracy she may pose, say organizers and those who study voting behavior.

“Crazy train. Sounds crackpot,” admitted Ryan, a focus group participant, after viewing footage of Lake repeatedly making false claims about the 2020 election last spring. But Ryan, who was identified only by his first name in the Zoom recording, still planned to vote for her in the August primary. He told the group’s facilitator that he was swayed in part by his “history of watching her for years” on the local Fox affiliate in Phoenix.

“Most of these folks, they’re not getting up in the morning thinking that American democracy is in peril, and that their vote is going to make a difference,” facilitator Rich Thau, president of New York-based Engagious Research, said of the swing voters he studies. Election denialism is just one issue among many that they consider when selecting a candidate.

The threat to democracy is not top of mind for many of the residents of the working class West Phoenix neighborhood where Maria Madrid, a former lettuce picker and hotel worker, is out canvassing voters. They seem more focused on their day to day challenges — juggling multiple jobs, making rent and paying bills, says Madrid, whose job when she is not canvassing is organizer for UNITE HERE Local 11, the hospitality union. Her pitch to voters focuses on economic issues. At the door, Madrid mentions the pandemic stimulus checks and distributes campaign literature that highlights U.S. Sen. Mark Kelly’s support for the Inflation Reduction Act. A lot of her time is spent just demystifying the process of voting.

Joan Ocampo Reyes, 21, stands outside his house and recites several reasons not to mail in his ballot. For starters, he can’t find it. “I don’t have time to,” he says. Plus he’s not political. Now he’s being schooled gently but firmly by Madrid in her native Spanish, while a paletero truck selling Mexican popsicles makes its rounds in the neighborhood. Reyes, who has a bee-sized tattoo below his eye and a nose ring, nods respectfully. Soon he’s thanking her. He’ll vote or she — or someone from her team — will be back to remind him.

15% of Arizonans say threats to democracy are the most pressing issue facing the state, according to a poll by OH Predictive Insights.

Infrequent voters like Reyes can make a pivotal difference, according to Brendan Walsh, political director for Worker Power, a political organization that works with the local. Worker Power — which focuses on young voters, people of color and swing voters — knocked on 800,000 doors in 2020 and contributed to President Biden’s narrow margin of victory by fewer than 11,000 votes in the state. (Disclosure: UNITE HERE Local 11 is a financial supporter of this website.)

On that same warm October Saturday, Ben, who wanted only his first name used, was shopping with his wife, Rebecca, at a Target in Paradise Valley, a suburb northeast of Phoenix. He sees Lake’s election denialism as a demerit, not a selling point.

Slender and 41, Ben wears a cap and trimmed beard. He says he leans libertarian and holds what have become typical Republican views. He wants less government spending and stronger border security. But what really has his attention are his skyrocketing grocery bills, which he blames on pandemic stimulus spending. “We’ve got six kids that we’ve adopted. Our grocery bill has gone from $1,400 to three grand,” he says, due to inflation and to the children’s growing appetites.

Ben says he’s critical of the party’s populist turn. But he downplays his disapproval of Lake’s stance, calling it the “lesser of two evils.”

Unlike Ben, 15% of Arizonans say threats to democracy are the most pressing issue facing the state, according to a poll by OH Predictive Insights. It’s the leading issue of concern cited by Arizona Democrats: 27% said it was their top issue. Some voters in closely divided Maricopa County are steaming mad.

The prospect of Lake, Finchem and Hamadeh being put in control of Arizona alarms experts who fear the trio will foment distrust in elections and act to undermine them.

“I want my vote to count,” says Jennie, an attorney, who worries that one day it might not. A self-described moderate, she’s planning to vote for Democrats all the way down the ticket, including for secretary of state candidate Adrian Fontes, who is running against Mark Finchem, who has been a member of the militia group the Oath Keepers. She’ll also try to keep Abe Hamadeh, the Republican nominee for state attorney general and another election denier, from taking office.

Finchem participated in the Jan. 6 March on the Capitol and has embraced QAnon conspiracy theories, saying that “a whole lot of elected officials” are involved in a pedophile network. As a state legislator, he co-sponsored a bill that would allow state lawmakers to overturn election results.

The prospect of Lake, Finchem and Hamadeh being put in control of Arizona alarms experts who fear the trio will foment distrust in elections and act to undermine them. “The election denial that is now taking place among a particular segment of the Republican Party undermines public confidence in elections. They will be in a position to advance these claims cloaked with the authority of the state,” said Stefanie Lindquist, professor of law and political science at Arizona State University.

As secretary of state, Finchem would be in charge of drafting the state’s elections procedures manual, a document that outlines the rules for elections. It must be approved by the attorney general and the governor and can have an important impact on how hard it is to vote in the state. Hamadeh would oversee the state’s election integrity unit and be able to prosecute fraud — real and imagined.

Finchem wants to curb early voting and sharply limit the use of mail-in ballots, currently used by 90% of Arizona voters. He and Lake sued to stop the use of electronic vote-counting machines in Arizona and pushed for hand counting of ballots, which experts say is less accurate and more time consuming, especially in large jurisdictions. Such an approach is especially worrying in a climate where conspiracies connected to voting are running rampant, says Jim Barton, an Arizona elections attorney who works for Democrats. In the future, Lake and Finchem could refuse to sign a document certifying the electors in a close presidential election.

In a worst-case scenario, Arizona legislators could substitute their own presidential preferences over those of the voters in 2024, with the excuse that the election was tainted.

Lindquist said the most likely path to overturning a future presidential election runs through the Arizona Legislature, where Republicans hold a single-vote majority in both chambers and election deniers abound. If elected, Lake, Finchem and Hamadeh could have important sway over that body, she said. “That would be a perfect storm if these three election deniers are elected and have control over the election apparatus, and have considerable persuasive power over the Legislature,” she said.

The danger from the Arizona statehouse will worsen if it is granted new powers by the U.S. Supreme Court when the justices consider Moore v. Harper, a North Carolina gerrymandering case this term, legal experts say. That case could give state legislatures almost unchecked power to set rules for federal elections without regard to state constitutions or courts. This year’s midterms will determine control of the Arizona Legislature.

Lindquist warns that, in a worst-case scenario, Arizona legislators could substitute their own presidential preferences over those of the voters in 2024, with the excuse that the election was tainted. Barton said Lake, Finchem and Hamadeh could “sow enough doubt so that they could make it easier for a Trump Supreme Court to affirm a Trump stolen election.”

It sounds preposterous. But that’s what Trump allies attempted in 2020, with Finchem’s support. They created alternate slates of electors in key swing states, including Arizona, using the rationale that Biden’s victories in those states would be overturned once they could prove their claims of voter fraud.

The overturning of an election in this manner would be “an extreme case,” according to Lindquist. “I would think that the voters in Arizona would be extremely unhappy with that,” she said.

Finchem’s opponent, Adrian Fontes, the former recorder for Maricopa County, has been warning about the dangers of such a scenario. “What it means is, if a Democrat wins Arizona in 2024, and the Electoral College is tied with neither candidate at the 270 [electoral vote] threshold [required to elect a president], Arizona won’t have a certified election, and the entire thing then gets thrown to Congress,” he told MSNBC. “And that’s not how this is supposed to work. Our people are supposed to pick our leaders, not our politicians.”

Finchem, meanwhile, told the Associated Press last month that he would certify the election “as long as all lawful votes are counted and all votes are cast under the law.” But he did not say who would decide if they were lawful or if he would abide by court decisions.

It’s possible to imagine that even voters like Ben, who once voted for establishment Republicans like the late Arizona Sen. John McCain, would come to regret their decision to vote for election deniers if the worst fears of Fontes and election law experts are born out. Then again, they might not.

Ben said he was horrified by the Jan. 6 attack on the Capitol. His wife, Rebecca, who mostly listened to the conversation as she stood by their shopping cart, chimed in, “I thought it was awful.” Asked if he would vote for Trump if he ran for office again, he said, “God I hope he doesn’t.” Then he paused for a moment. “What are my options?”