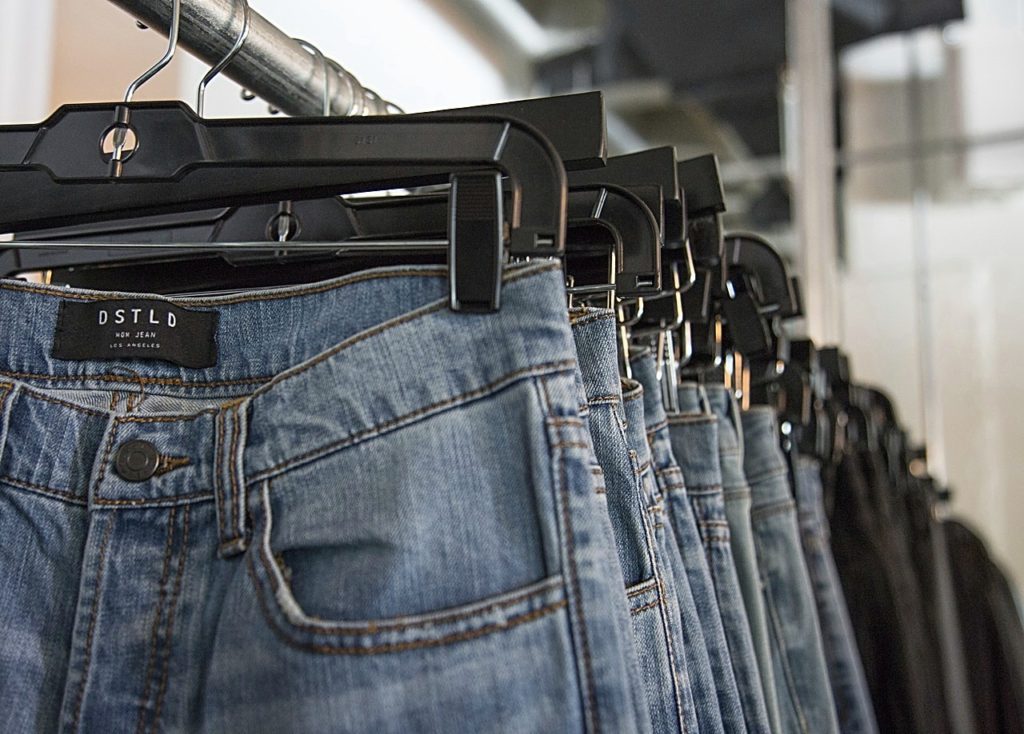 Christopher Parras is a pioneer of sorts.

A year ago, the 28-year-old media company employee invested $3,000 in a West Hollywood-based startup, thanks to recent changes in a federal law that allows people of modest means to play the role of venture capitalist.

The company he chose, DSTLD (pronounced “distilled”) is an online apparel firm whose promise of premium denim at affordable prices caught his attention. He became a customer and when the company launched a crowdfunding campaign, he wanted in.

“I felt like this was a nice chance to be part of a company from the beginning,” says Parras, who adds that fashion had always been “a little passion of mine.”

DSTLD raised $1.8 million from that offering, made possible by the Jumpstart Our Business Startups (JOBS) Act, signed into law by President Obama in 2012. The company—which projects sales of $7.7 million for this year—plans a second campaign next month using a New York-based platform called SeedInvest.

Having seen documentaries about sweatshops, Parras, who lives in a small city in northwest Riverside County, was attracted to the fact that DSTLD markets itself as sweatshop free and “more eco-friendly.”

DSTLD is one of a slew of online fashion companies that market themselves as being “ethical,” an umbrella term that refers to a concern for the impact a firm has on working conditions, the environment and animal welfare. Like Everlane, Zady, Kestan, Reformation, Tuckerman & Co. and Elizabeth Suzann, these online outfits are building direct relationships with a customer base increasingly conscious about how its clothes are made.

But most apparel companies – DSTLD included – do not own the factories that make their clothes. Many source their products from far-flung manufacturers and mills in a global supply chain that has historically been rife with labor and environmental problems.

Being an ethical apparel firm is therefore a complex proposition, especially when you add to the equation fickle and price-sensitive consumers with a myriad of buying choices. Very few brands—if any—can claim to have fully minimized their environmental footprint while also guaranteeing living wages to workers from the cotton field to the factory floor.

That said, advocates claim there are important benchmarks to look for and that making a firm’s supply chain more transparent is a critical part of being an ethical brand. New York-based Project JUST is a nonprofit focused on helping the socially and environmentally conscious consumer make choices about where to shop and which questions to ask apparel companies.

A Project JUST consumer guide recommends scrutinizing which kinds of fabrics are used, whether the brand can claim any third-party’s nod of approval (like a fair trade or organic cotton certification) and, if the company has not done these things, whether it has publicly committed to meeting goals in the future. Transparency, says Project JUST’s Jacinta FitzGerald, is “one of our key criteria” for how responsible a company is.

On its website, DSTLD touts its “moral fiber.” The company “carefully screen[s]” its suppliers, laundries and factories to ensure “products are fairly manufactured and 100 percent sweatshop-free.” In addition, “many of the fabrics” are “eco-friendly and fully sustainable” and, “where possible,” the company uses “eco-friendly dyes.” 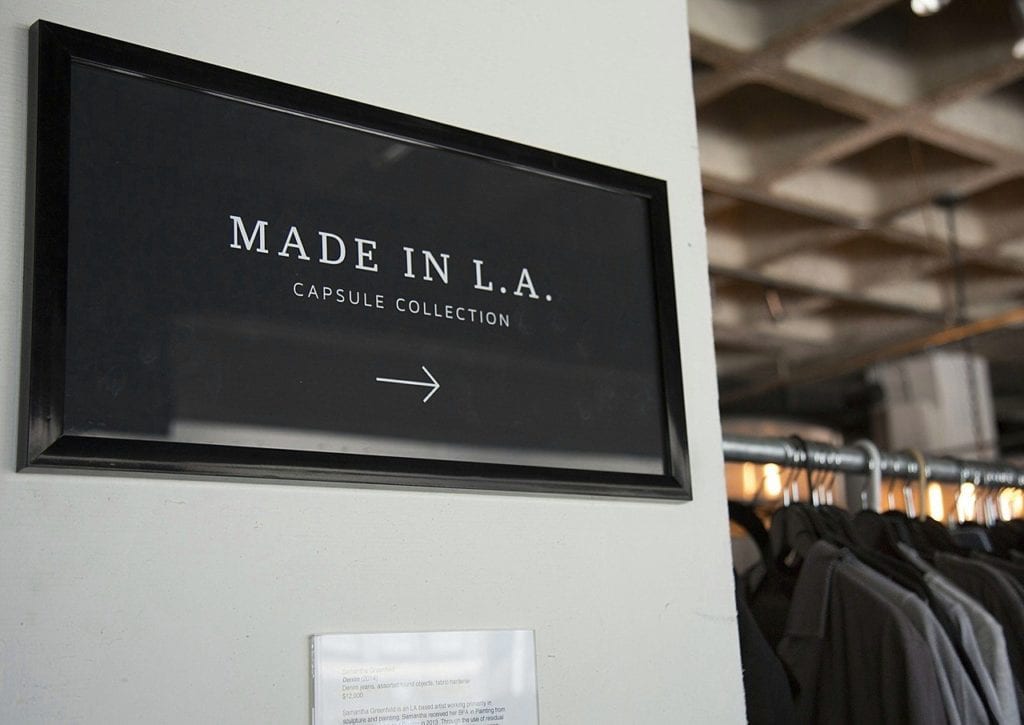 Large photographs of denim-clad models decorate the walls of DSTLD’s stylish Beverly Boulevard offices of founders Corey Epstein and Mark Lynn. It’s mid-July and the air conditioning is off because the building is about to be renovated, and the DSTLD staff are the lone holdouts as the 14-person company waits to find new digs.

Epstein wears a black T-shirt and jeans, a daily uniform he described as “liberating.” (“You know you look good because you looked good yesterday,” he says.) His business partner Lynn, in his early 30s like Epstein, opts for gray T-shirt and jeans. (The DSTLD line offers a monochrome palette of black, gray and white tops, jackets, skirts, jeans and accessories.)

The two men are casual and unguarded, occasionally interrupting and correcting each other. At times, the ethical component of DSTLD’s brand seems front and center to them. Epstein talks excitedly about a mushroom-based alternative to leather that he hopes one day to be able to use in their line. Lynn described their ethical approach as “inherent,” and Epstein, as “part of our blood.”

But when it comes to the marketing of their products, they both say it is not what they want to put in the foreground. The crowdfunding campaign meant the firm disclosed an unusual amount of financial information for a private company. Its 84-page filing with the Securities and Exchange Commission includes two sentences about its ethical commitments.

“You can lead with environmentally-friendly first as your ethos,” says Lynn, but “it stigmatizes you a little bit. We try to guide the consumers’ choice by providing them with a value proposition.” By that he means, a pair of jeans that everyone wants to wear and be seen in.

Their company did not begin as an ethical brand. In 2012, Epstein launched 20Jeans, a company that purchased overstock denim from L.A.’s downtown fashion district and sent it to Hong Kong and Shanghai factories to be made into $20 men’s jeans. The initial venture taught them a few things about the fashion industry – one was that you get what you pay for. 20Jeans rejected up to 40 percent of orders because of poor quality, Epstein would tell the Los Angeles Business Journal. The second lesson was that the fashion industry generates an enormous amount of waste. In fact, every person in the U.S. tosses an average of 80 pounds of clothing annually. Clothing magnate Eileen Fisher has said apparel is the most polluting industry after oil.

In 2014, Epstein, with Lynn’s help, rebranded the company as DSTLD and refocused its mission on producing a high-quality minimalist line for the “creative class that lives and works in denim.”

Now they source from high-end suppliers like Cone Mills in North Carolina, which Project JUST’s FitzGerald acknowledges is “meant to be quite a good mill” and JS Apparel, a Carson, California-based company whose clients include Nordstrom and American Apparel.

DSTLD contractors use “natural dyes” and “natural softening enzymes” on all items and water at their wash houses is cleaned and reused to reduce consumption, according to company spokesperson Hannah Laverty. It also uses modal for some of its clothes, a fiber made from a renewable plant. But Epstein acknowledges that not everything is eco-friendly about their supply chain, and there are things that “pain” him about the making of black denim jeans, in particular.

Still, says Epstein, what’s most polluting is not the making of a pair of jeans. Rather, “it is, do you have that pair of jeans for 10 years or six months?” He questioned the value of an organic label if it’s affixed to clothing that no one can afford. The company has not made public any goals around gaining third-party sustainability or fair trade certification. But unlike some more costly ethical brands, DSTLD is trying to “nip at the heels of the fast fashion guys,” says Lynn. 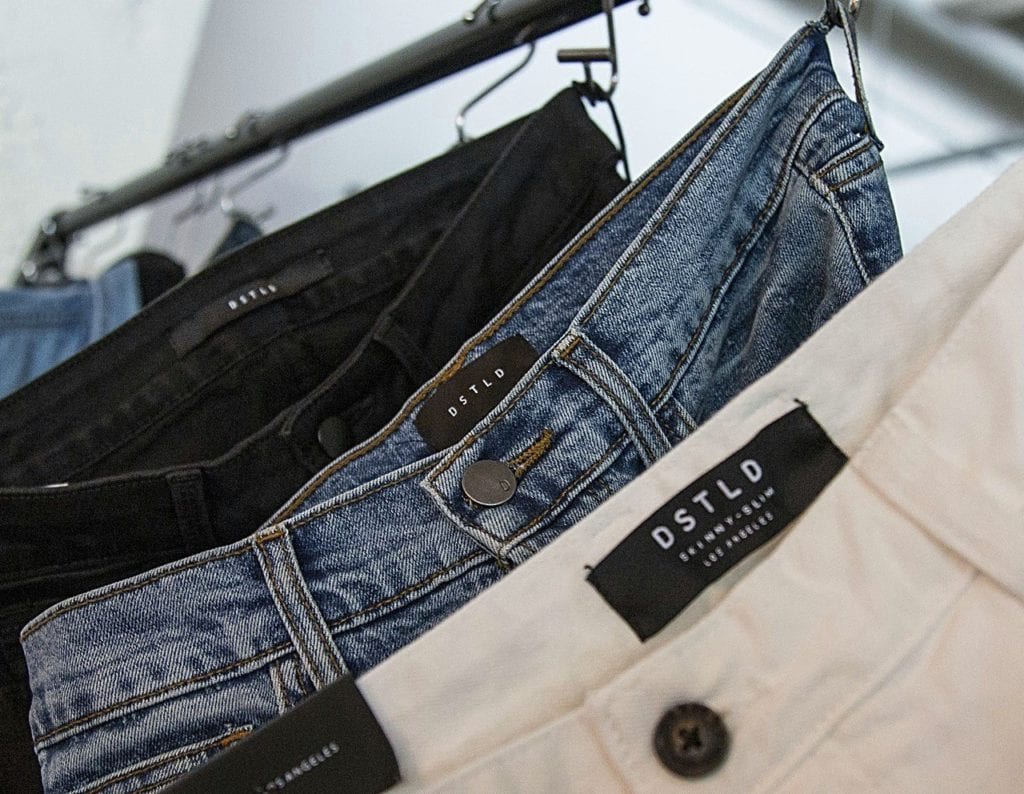 DSTLD’s business model, with its focus on quality and wardrobe essentials, and its direct relationship with consumers, says Epstein, is pushing in the other direction. Nobody is telling DSTLD to lower prices. Indeed, “we’ve had vendors give us prices where we’ve said, ‘That’s too low.’”

Epstein reports that 70 percent of the company’s clothing is made in the U.S. That is unusually high. In 2012, only seven percent of apparel-related products were made domestically.

But the “Made in the USA” label is not a guarantee of good working conditions, claim labor advocates and wage-and-hour officials who say sweatshops are still found in California. As recently as last year investigators from the California Department of Labor’s Wage and Hour Division found wage and hour violations in 85 percent of the 77 factories investigated in Southern California, Women’s Wear Daily reported. Many Los Angeles garment factories are dusty, lack proper ventilation, have blocked exits and workers report health problems as a result, according to a 2016 UCLA Labor Center report.

The move from “fast fashion” to “slow fashion” is taking the industry in the right direction because it can set the stage for building longer-term relationships with suppliers, a precondition for improving standards, says Liana Foxvog, director of organizing and communications at the International Labor Rights Forum, a Washington D.C.-based advocacy group.

But, says Foxvog, “slow fashion” is no guarantee of good working conditions, either. She sees living wages, freedom of association and compliance with the United Nation’s International Labor Organization standards as essential first steps. Like Project JUST’s FitzGerald, Foxvog also emphasizes the importance of disclosing factory names and addresses, so that workers and reporters can “connect the dots” between those factories and the clothes customers are buying if working conditions are substandard.

“Ideally, if a brand truly cares about human rights and labor rights in their supply chains, then that brand should know their whole supply chain, and they should be taking steps to ensure that no labor laws are being violated,” says Foxvog. An increasing number of global brands, like H&M, Patagonia, Levi Strauss and Gap Inc. are publishing information about their factories. DSTLD declined to share its full list of suppliers with Capital & Main, although several suppliers are listed in the company’s filings with the Securities and Exchange Commission.

DSTLD has a set of minimum worker and environmental standards it shares with each of its contractors and its production team visits every factory that it contracts with. But the company currently lacks the capacity to audit factories. Instead, it contracts with plants that work with well-known brands that do have auditing capability, says Epstein.

Piggy-backing on the auditing infrastructure of trusted brands is “a smart strategy” for a small firm, says Vincent Stanley, co-author of The Responsible Company, who was a longtime marketing executive at Patagonia, a company that pioneered ethical retailing.

Stanley cautions against using the term “sweatshop free,” however. Companies should be “as specific as possible about what they are doing.” Even an audit is only a snapshot of a company at a point in time, he says. DSTLD’s founders are reluctant to have a deeper conversation with their customers because, as Epstein points out, “it’s a long rabbit hole.”

At this point, DSTLD seems to have the confidence of its customer-investors who are passionate supporters of the brand, in spite of the paucity of information on its website about its ethical commitment or factory partners.

Joy Ready, who works in advertising, fell in love with the comfortable fit of DSTLD’s jeans and will wear no other. She invested $500 in the last crowdfunding round and plans on participating in the next. She would like to hear more about DSTLD’s ethical commitments in a blog, but argues that a company would not stake its name on claims that did not hold up to scrutiny.

“I know what they are saying on the website is true,” Ready says.

A rapidly growing young company that is still operating in the red, DSTLD has a ways to go before it is bought or goes public. But if that happens, Ready, Parras and more than 1,700 small investors stand to benefit financially. That promise, plus a great fitting pair of jeans at an affordable price, may be enough for them to remain brand evangelists for DSTLD.

Still, says Stanley, the rewards for transparency—by which he means talking in more specifics about what the company is doing and is not doing—are in a company’s best interest. Among other things, it can help build trust.

“What you want to do is raise the level of conversation with the customers,” according to Stanley.