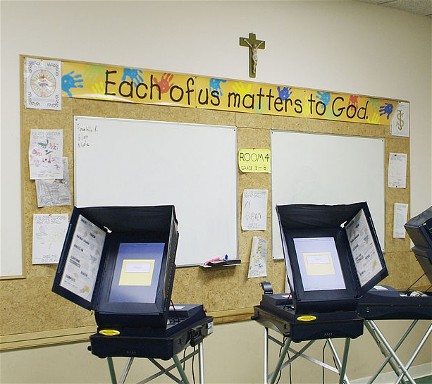 Not long after the Los Angeles social upheaval of 1992, Mayor Tom Bradley tapped Warren Christopher, former Secretary of State under Bill Clinton, and a long-time Angeleno, to lead a panel examining the issues surrounding what is still the most costly urban riot in American history.  As part of his study, Christopher convened a group of clergy. He wanted to know what our parishioners may have told us about their interactions with officers of the police department that they might not say in public.

Late in the meeting, Christopher asked if we had any perspective on the role of religion in public office. There was a moment of silence, then we said something like this: People expect elected officials to hold some faith-informed values, but they don’t want politicians to impose their religion on everyone else.

This experience comes back to me in the noise and glare of the Republican presidential primaries. Some candidates preach their religious doctrines as a political solution to impose on the rest of us. As cacophonous as that may sound to some of us, it is music to the ears of others. It has been that way for a long time. Not just in this country, but throughout history – and across faith lines, as far as I can tell. Since I am most familiar with Christian history, I’ll focus there as a metaphor for the interface between the realms of religion and politics, church and culture.

From the beginning there were those who thought religion was an otherworldly affair. Entire Protestant denominations consider this world not their home and look toward to an afterlife more real than this one. Some withdraw into isolated communities, like the Amish. Others practice a personal pietism as the exclusive meaning of their lives. They have no stake in the nation’s political realm, and they hold no perspective. In this tradition, religion is everything and anything else is not worth much.

At the opposite end of the spectrum, there are those whose faith informs a very public participation, and who seek to impose their purity of religious values on a society they see as filled with corruption and evil.  These people seek to transform the public order to conform to a “golden age” when things were pure, or to prepare culture for a future era of perfection. These people seek to use the tools of the democratic process to force their religious views on everyone else. One candidate has just declared he would impose a Christian set of laws, much like Shari’a law in a Muslim country.

Then there are those who see the basic symbols of their faith so interwoven into the culture, that just reminding people of their existence is enough. Such civil religion dominated this country for decades and remains pervasive. Public meetings begin with Christian prayers, public speeches require an obligatory “nod to God”, and the Pledge of Allegiance declares us a nation “under God.” Secular people might think that should be enough, but for this field of candidates, it is not. For them it fails to stoke the fires of people who think this society has become too secular, strayed from the correct path, or moved too far from religious sentiments.

Another strand believes that our faith traditions teach values that we should practice as a nation, values already embedded in society, but ignored by those in power or who are too rich to care. These people also act very publicly in order to press what some call a “preferential option for the poor.” They do not seek a sectarian religious country, but they push to make our country a more just, participatory and sustainable place. That’s what we told Warren Christopher around that table. It is what I would tell these candidates for president.