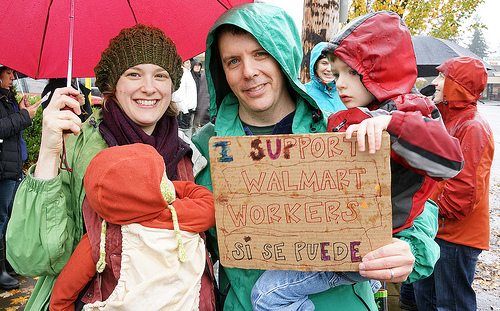 So the day of action at Walmart, the world’s largest retailer, has passed ­ at least for the time being. And it turned out to be much larger than the company’s executives in Bentonville had predicted or care to admit.

Thousands of Walmart workers and their allies protested for better wages, affordable healthcare benefits, full-time jobs and an end to management retaliation for speaking out in at least 100 cities, including in Dallas and Lancaster, Texas, Miami and Kenosha, Wisconsin, and several other locations not know for their activism. Although the final tally will not be clear for some time, “open-source” actions of some kind took place at Walmart stores in 46 different states across the nation, with major demonstrations in California, Washington, New York and Massachusetts.

Before Black Friday, the company’s management insisted that the “so called protests” involved a handful of associates at a handful of stores, supplemented by non-Walmart employees, and were largely a result of the nefarious activities of the United Food and Commercial Workers (UFCW). But Walmart executives will now find it much more difficult to dismiss the protests or contend that the striking employees are a wholly owned subsidiary of the union ­ as it did in its effort to get a court injunction to block the strikes.

Contrary to what the company has claimed, Friday’s worker actions were not about union recognition, but about gaining respect on the job, and from their very beginning, Walmart employees themselves have organized the protests, albeit supported by a broad range of women’s, immigrant, civil rights and community organizations, as well as the labor movement.

The actions in support of respect at Walmart started in early October, with the first strikes ever in the history of the company, when workers walked off the job at retail stores in at least twelve cities across the country. The striking workers have been joined by protests by workers at warehouses contracted to Walmart, with one stoppage in Southern California lasting for 15 days. Strikes and protests continued throughout October and November, often at short notice, eventually leading up to Black Friday’s widespread national day of action.

Predictably, Walmart management has acted to squash the employees’ protests.

Last Wednesday, the Organization United for Respect at Walmart (OUR Walmart) filed a complaint with the National Labor Relations Board stating that Walmart’s HR department in Bentonville instructed store managers to “threaten workers with termination, discipline, and/or a lawsuit if they strike or engage in other concerted job actions on Black Friday.” OUR Walmart’s complaint provided clear evidence of attempted intimidation by the retail giant: a Walmart spokesperson stated, on the CBS evening news no less, that “there could be consequences” for employees who participate in the Black Friday protests, even though it is clearly illegal to retaliate against workers who participate in “protected concerted activity.”

Store-level managers, who have for decades been Walmart’s first line of defense against workers who dare to speak out, have reinforced senior management’s message. Walmart workers at a store in Fairfield, California stated that their manager told them that corporate headquarters in Bentonville “gave me the freedom to say whatever I want. If any one of you walks off the job or participates in an action on Black Friday that results in the loss of store sales you will be fired and sued.”

OUR Walmart also states that managers at Walmart stores in Dallas, San Leandro, California and Fairfield, Connecticut tried to intimidate employees against participating Black Friday’s strike actions. As a result of protests, the NLRB is now investigating 35 complaints of violations of federal labor law.

Despite the official line coming from Bentonville ­ still denying that workers are poorly paid and badly treated, even in the face of overwhelming evidence to the contrary, and still denying that the protests have widespread community support — it is unlikely that the job actions will end anytime soon. Neither the protesting workers nor their growing ranks of supporters are going away, and the protests are only likely to grow stronger.

For the first time in its half-century history, Walmart is facing significant labor strife. And for the first time ever, senior management is clearly rattled, fearing the employees’ actions will escalate to something beyond its control. In many ways, however, they already have — the protesting Walmart workers have attracted the support tens of thousands of community allies throughout the country and beyond, and, through social media, the backing of hundreds of thousands of supporters throughout the world.

Whatever the outcome of the protests, Walmart will never be the same company again.

John Logan is professor and director of Labor Studies at San Francisco State University. His post first appeared on BeyondChron and is republished with permission.

Progressive Economist Robert Pollin Gets Down to Business