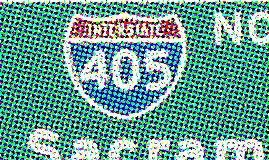 We live in LA, city of traffic jams on the 405 and other freeways.
One recent morning we had three cats bunched up on the patio outside our cat door.
Elise’s traffic report: “It’s a jam-up on the cat-oh-five!”

She’s passenger. He’s driving.
Her face is angry and she speaks quickly.
She leans away from him. He leans toward her.

Jeff Rogers has posted hundreds of poems in the “Three Line Lunch” series at www.fierceandnerdy.com, where he also blogged as “Hippie Squared.” He has published in Home Planet News, Los Angeles 1956 and Direction magazine. He has performed in, scored and directed choral poetry with the group Gray Pony. He invented the word blogger in 1987 as a child’s curse word in “Blogger Old Potatoes,” only to lose the contest of definitions to the one we now know. He grew up in Michigan, but has lived in L.A. for 30 years.

I Was a Communist in Bill O’Reilly’s Dreams