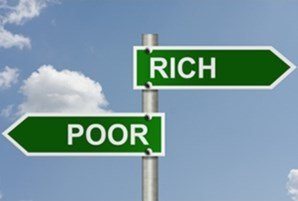 Rich and poor — two sides of the same coin. That “coin” meaning money and how much you have. While Americans seem to love money and idolize those who possess it, having it isn’t so good for you. That’s right. Not only does money not buy happiness, it can be downright hurtful to those who are rich, as well as the rest of us.

For years I have noticed that BMW drivers tend to cut people off and generally drive with an attitude of arrogance toward others. Now some recent studies demonstrate that I am not just seeing things. People with more expensive cars drive as though they’re entitled to cut people off at intersections or whip by on the right.

The rich also prefer to play and work alone – distancing themselves from others. But you don’t have to actually be rich to act like that. People who entered simulation games in sociological studies with more money took on these characteristics. They were less compassionate, more likely to cheat, lie and steal. Subjects who were told they were rich even refused to share their candy with children evenly, holding back more for themselves. Wealth shrinks generosity.

This loss of compassion may develop because the rich buffer themselves from others. They hold the resources that allow them to shun any need for help. As a result they are isolated from people not like them. I remember a wealthy couple telling me that they never drive south of Wilshire Boulevard. I was stunned – and saddened because these folks missed so much of the city’s rich cultural tapestry.

So people who are rich – even with only simulated wealth – act with less social awareness and operate like they need no one. This leaves the rich empty of a spectrum of emotions and it makes them less likely to contribute to the common good either through simple social interactions or charitable contributions.

On the other side of the coin, people who are poor suffer a host of disabilities that add to their already substantial burdens. The common wisdom argues that poor people are lazy, or not so smart, or not motivated. The reality is more painful.

Poor people feel more stress trying to balance the necessities of life. Recent studies indicate that financial pressures inhibit people’s cognitive functions, so they make bad choices, develop a kind of tunnel vision and ignore their long term best interests. This constant background noise in the brain actually impairs the decision-making functions of the frontal cortex and leads to measurably lower IQ scores — as much as 13 points in one study, nine points in another.

What scientists now call “toxic stress” – lack of adequate nutrition or living amid constant anxiety – misshapes the structure of a young child’s brain. The actual conditions of protein deficiency and constant worry that accompanies poverty inhibits the healthy formation of the brain. The reduced capacity in turn points these children toward early childhood obesity and other chronic ailments, as well as a career of low academic development.

Turns out people who are wealthy even get to live longer than people who are not. Over the last 30 years the longevity differential between the rich and the poor has doubled to four and a half years. That means that poor people get a diminished capacity and a shorter life.

So on one side of the coin, the rich tend to self-isolate and disconnect from the broader social context, taking less responsibility for the common good. The poor tend to walk around in a fog, biting their nails over what bills to pay. So what makes people happy? A new study says that the happiest people are the ones on both sides of the coin who find meaning to their lives through connections to community and service to others. That behavior even stimulates genetic resistance to cancer, diabetes and cardiovascular disease. Who knew? Apparently, that’s the side worth striving for.

Banning BART Strikes Is No Answer to Labor Disputes

Repowering Los Angeles One Block at a Time