Every year for Black History Month, the TV networks and premium movie channels roll out the same programming: Malcolm X, Mississippi Burning, The Color Purple…. It’s not that these films aren’t great; they are. It’s just that every year for as long as they have been around, they’re all that come on during February. I can quote The Color Purple line for line. The history of black folks is larger and more diverse than the civil rights movement and slavery. Let’s give some other films a shot, shall we? In the spring of 1985 a bomb was dropped on a row house in Philadelphia. A fire spread quickly and burned down 61 houses, eventually killing 11 people, including five children, and injuring numerous others. The fire and police departments stood by and did nothing to stop the blaze. They were operating under the direction of the Mayor of Philadelphia who gave the directive to let the fire burn.

Using archival footage and riveting testimony from surviving members of MOVE, Jason Osder retells the story of the MOVE organization from its idealistic beginnings to its revolutionary downfall. We talk about the violent past of black history as if it happened in the 1960s and stopped once we all overcame. Let the Fire Burn is a reminder that institutional racism is deep and we have much to overcome. 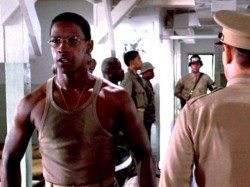 I weep for you if you haven’t seen A Soldier’s Story. It’s the only movie HBO ever played during February in the early 1990s. But there’s a reason for that: It’s a damn good film that features damn fine performances from Denzel Washington, David Alan Grier, Howard E. Rollins, Patti LaBelle and Robert Townsend.

Based on a Pulitzer Prize-winning play by Charles Fuller, the film centers on a black Army regiment in the South at the end of World War II. A black officer is sent to investigate the murder of a black sergeant and his findings are not what he first expected. The film explores the standard themes of racism, Jim Crow and segregation, but in a way that will rip at your heart as you recognize that this story is historical—but we have not moved very far forward.

Based on a real high school in Chicago and written by one of the creators of Good Times (you know it’s going to be good now!), Cooley High has an epic soundtrack provided by Motown, ’60s threads and some pretty fine lookin’ mamas and papas.

I never imagined in 2013 people would be freaking out over an adorable little girl pouring Cheerios on her black father after asking her white mother about the veracity of the statement that Cheerios are good for your heart. But there you have it: People still freak out about interracial couples. How weird is that?! But when you think about it, it was only 50 years ago when it was still illegal for black people and white people to get married in lots of places. So, in celebration of a biracial President and a biracial Cheerios girl and biracial people everywhere, definitely check out Sidney Poitier, Spencer Tracy and Katharine Hepburn in Guess Who’s Coming to Dinner. Oh sure, sure you know what all about it. But chances are you’ve never actually seen the film, now have you?

Sidney Poitier plays the charming (what else?) doctor boyfriend of Hepburn and Tracy’s daughter. While they consider themselves to be progressive, they are taken aback by her choice of mate. Hilarity ensues.

Get on the Bus
In 1995, something just short of amazing happened. Louis Farrakhan, the controversial leader of the Nation of Islam, along with 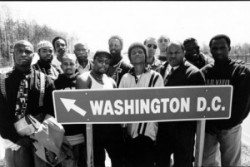 leaders of civil rights groups and local chapters of the NAACP, organized the Million Man March. Created to combat negative stereotypes the media was creating of black men and serving to bring black men together in strength, the demonstration was a complicated success. The event is portrayed beautifully in Spike Lee’s film Get on the Bus.

Get on the Bus follows a group of men riding cross-country from L.A. to Washington D.C. for the march. It’s a mish mosh of various types of men from all different backgrounds with nothing in common except their gender and race, which might be the most important thing of all. 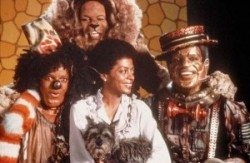 … I didn’t really think I’d have to justify this. It’s The Wiz…

(This feature is cross-posted at Dog Park Media.)