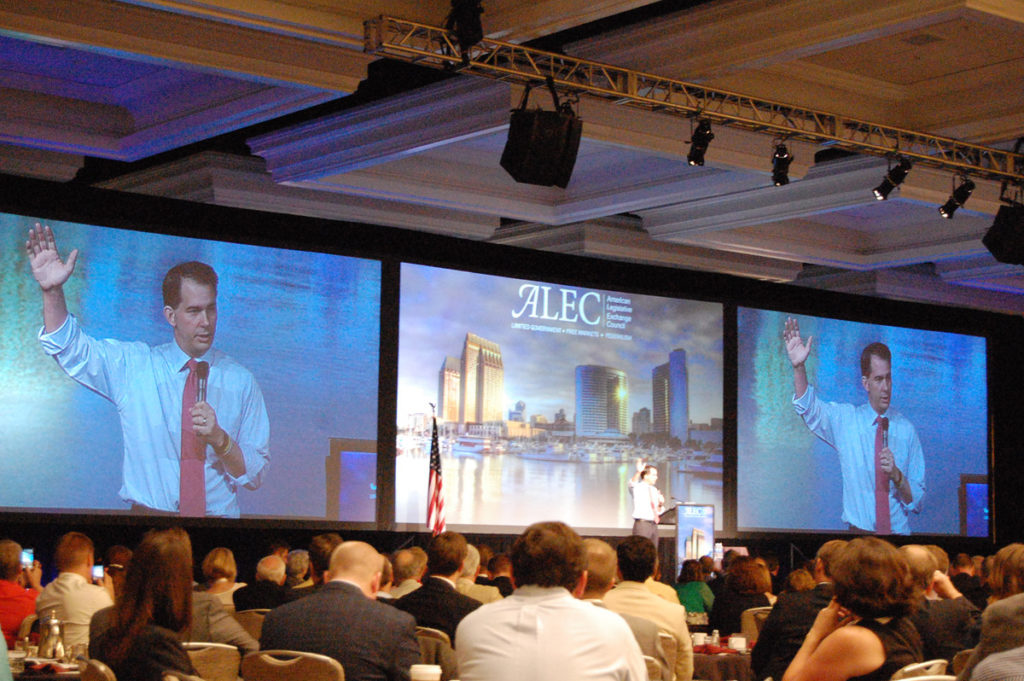 When the Wisconsin governor took the dais Thursday at the American Legislative Exchange Council’s annual conference in San Diego, his audience was ravenous for any vision that included destroying unions and cracking down on America’s criminal underclass.

The venue was the plenary croissants-and-eggs breakfast, but it would be hard to imagine an audience hungrier for the red meat Governor Walker threw out to it.

Every key bill Walker has been associated with, since his get-tough-on-crime heyday as a state assemblyman in the 1990s, has been a plagiarism of an ALEC model bill. Such as laws that eliminated parole (and ballooned state prison populations) or that imposed a voter ID law, gutted public education and teacher protections, and made Wisconsin the 25th right-to-work state.

Walker himself isn’t an actual member of the secretive corporate lobbying network (ALEC only admits legislators, not chief executives), but no other political figure  today has so faithfully promoted ALEC’s laissez faire policy absolutism as Walker.

“We took on the unions,” he crowed. “We passed . . . regulatory reform. We defunded Planned Parenthood and passed pro-life legislation. We passed castle doctrine and concealed carry — so law-abiding citizens can protect themselves and their famil[ies], and their property. And I’m proud to say in our state, as blue as it is, our state now says it’s easy to vote but hard to cheat — you need a photo ID to vote.”

The applause was rapturous.

Just in case the Walker/ALEC program was beginning to sound a little too familiar to some of the older ALEC legislators in the house, the presidential candidate admitted, “Years ago, a plan like that worked pretty well under a guy named President Ronald Reagan.”

He characterized what he called “the Obama-Clinton doctrine” as both leading from behind and heading towards disaster. He also invoked the memory of the Iranian hostage crisis of 35 years ago to remind listeners that Iran is still the same dirty dealer.

For that, the Governor received a prolonged standing ovation.

Related Topics:ALECScott Walker
Up Next