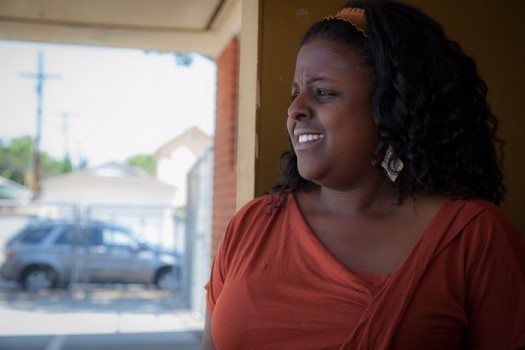 (They drive our trains and buses, teach our children, repair our roads and protect our safety. Public employees perform these and countless other jobs, although they remain mostly off the radar of the public they serve. With our new “Pro Publica” series, Frying Pan News presents the lives of these men and women front and center.)

After 10 years of marriage, Aisha Blanchard-Young’s husband is still shocked by the amount of time Aisha spends in her kindergarten classroom teaching. He jokes that if someone really wants to find out what it is like to be a teacher, they should talk to a teacher’s spouse. As a quality control technician for a stadium electronics company, he never has to take his work home. Aisha isn’t as lucky.

During the school year Aisha gets up at five in the morning to ready herself and the couple’s two boys (one 5 and one 2) for the day. She drops them off at their pre-school before heading to work at Bennett/Kew Elementary School in Inglewood. Contractually, her day starts at 7:45 a.m., but she tries to get there at least 30 minutes early to go over her lesson plans, make sure the classroom is in working order and to use the copier.

Her students arrive at eight o’clock. From the moment they walk in, Aisha is wholly and completely there for them, making sure they’re happy, comfortable and ready to start learning— giving special attention to students who are having a hard time at home.

Aisha remembers one student from years past, Johnny, who had been dealing with the separation of his parents and the death of a grandmother. Aisha always made sure to connect with him the moment he entered the room to do “something that puts him in a different space.” Asking him how he was doing, telling him he looked sharp that day, anything to distract him from his problems outside of the classroom.

She has to be ready to do this for every one of her students — engaging with them, helping with their personal and educational problems until two o’clock. She rarely takes a lunch break, preferring to spend time going over assignments that the students find challenging or getting some more one-on-one time with them — which is hard to do with 32 pupils.

After her students leave, Aisha remains to prepare lessons and get ready for the next day of class before picking up her own kids at six. On the way to get them, Aisha makes a point to call her students’ parents to check in. She tries to foster an environment where parents aren’t afraid of getting a call from their child’s teacher. So, instead of calling only about problems, she tries to phone just to update parents. And she encourages parents to get in contact with her, giving out her number to each of them.

Her teaching style has a heavy social justice focus, especially for an elementary school teacher. In the past Aisha has taken students on field trips to schools in different communities to look at how their learning conditions vary. Her ultimate goal is to have her students actively participate in their own education to create self-motivated learners and critical thinkers.

Aisha traces her interest in social justice to her parents, both of whom are from Baton Rouge and experienced the very worst of the Jim Crow Deep South. They took it upon themselves to make sure their children were aware and knowledgeable of the social inequalities that exist in the United States, with a particular emphasis placed on education and hard work as tools that could be used to rectify them. Teaching became a natural career choice for Aisha.

At home, after feeding her kids, helping them with their school assignments and then putting them to bed, Aisha goes back to work. She reads education books, teacher blogs and Pinterest to pick up new techniques and activities to keep her students interested and engaged. And, of course, she has to deal with whatever household tasks need attention. At midnight, she finally heads to bed.

If time was the only contribution that was asked of her, that would be one thing. Many jobs, after all, require longer hours than the standard 40-hour work week. But that is hardly all she has to give up to do her job well. It is hard to talk to Aisha for very long without sensing her deep devotion to her students, “her 32 curious minds.” It is well known that California’s public education system is in dire straits, with Los Angeles in particularly bad shape. But the Inglewood Unified School District is in an even more precarious situation. Taken over by the state last September, it is likely that the district will be the second in California’s history to be completely dissolved.

For Aisha, this means that she and her fellow teachers could face a pay cut of up to 15 percent. This is disheartening because the state voided a previous pay cut that had been negotiated by the Inglewood Teachers Association— by firing the superintendent who agreed to it and claiming that he didn’t have the power to negotiate the agreement in the first place.

Even more disheartening for Aisha personally is the fact that her family already runs on an incredibly tight budget— one that includes about $200 of spending a month on supplies for her classroom. She’s provided with supplies at the beginning of the school year: eight reams of paper, glue sticks, scissors and so on. However, eight reams of paper are hardly sufficient for 32 children’s homework, classwork and handouts for a whole year, while glue sticks run out and scissors break. So Aisha is left to purchase replacement supplies with her own money.

For her, a 15 percent pay cut is completely unsustainable. In anticipation of it, she is teaching summer school, a time she usually reserves to preparing for the coming school year and spending quality time with her kids. As she points out, this is the school district asking teachers to pay to keep their jobs. Even worse, Aisha has no idea where the money is supposed to come from. Does she sacrifice food? Tuition for her kids? Rent? Or the supplies she buys for her students?

But she is doing her best to keep giving her students the best education she can. In her words, “it’s hard to stay positive, but that’s also why it’s nice to be in the zone in your classroom because you can close the doors and it’s [me and my students] and I don’t have to think about everything else that’s going on… At least in that 8 to 2 o’clock period.”