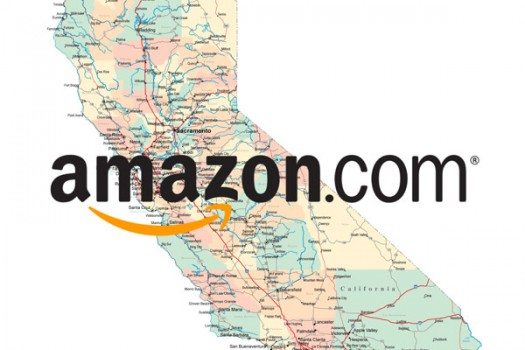 I used to love Amazon.com.  After a book group meeting I’d run home and order a used copy of the next book we were reading, sometimes paying only $1.00 (plus shipping) for a “lightly worn” paperback.  I even bought a CD player and cordless phones from the online retailer.  Amazon introduced me to online shopping and I thought I’d never have to enter a mall again in my life.

But this summer Amazon threatened to declare war on the great (and economically struggling) state of California, and I’m pissed off.  By refusing to collect California sales taxes on purchases from our state, Amazon wanted to be a freeloader of local government services while it rakes in millions of dollars from California residents.

Where would Amazon.com be if the state and local governments didn’t maintain the streets and highways that UPS and U.S. Postal Service trucks drive on to deliver those little Amazon cardboard packages?  And how could we feel sure that those packages wouldn’t be snatched from our front doors if local police departments didn’t patrol our communities?  And what about the folks who actually wrote those books who were educated at California public schools?  Or were turned on to writing by hanging out at our precious public libraries?

The  building blocks of our civic life are suffering severe budget shortfalls, while Amazon refused to assume any responsibility for maintaining the basic services that  make online shopping possible and profitable. (One activist group, American Rights at Work, alleges that Amazon operates the equivalent of mail-order sweatshops in America.)

If Amazon isn’t liable for turning over the sales tax on our purchases to California, then who is?  It turns out  WE, the consumers are.  Amazon.com has built its empire on a system where we consumers are supposed to add up the value of our annual online purchases and pay sales tax on that amount to the state of California at the end of the year.  And if we don’t we’re guilty of tax evasion!  It’s hard enough to balance our personal budgets in this rocky economy without having the real cost of online purchases hidden until we figure it out at tax season.

So as much as I hated to do it, I decided I was going to stop buying through Amazon.  The company had invested $5 million to qualify a ballot initiative to reverse a new California law requiring  online retailers to collect the estimated $317 million in sales tax owed to our strapped state and local city budgets.

But in an eleventh hour agreement Amazon and the legislature came to a compromise in which Amazon agreed to abide by the new law in 2012 and withdraw its initiative from the next statewide ballot.  This does not preclude Amazon from challenging the law in court, as I understand it, or for making technical changes that could still exempt itself from the sales tax requirement.  But at least for now the ballot battle is over, the state of California is not yet enjoying the income from our millions in online Amazon purchases — and I’m not forgetting my own personal nuclear option of swearing off the Amazon habit.

Five Signs We’re Going to Hell in a Prius