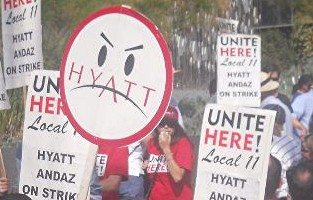 We were met at the Hyatt Andaz loading dock with a big sign that said, Welcome Back, Andaz Employees.  I crept into the entrance, a nervous wreck, still uncertain if I had been fired or replaced, but I was soon relieved to find that everyone had been let back in. We were greeted with forced smiles and boxes of multi-colored donuts.

Union members refer to each other as brothers and sisters. It may seem cultish at first, but after my experience with a seven-day strike at the Hyatt Andaz last week, it makes perfect sense. There is nothing that bonds people like walking off a job together, protesting their employer and taking no pay for a week, all in hopes of getting a better situation. We made a financial sacrifice and some of us, including myself, are pondering the first of the month with certain dread.

There is a general sense of uneasiness, and the union coworkers who crossed the picket line on the Sunset Strip and worked, don’t look me in the eye anymore. Indeed, they are more like stepbrothers and stepsisters now. Some of them saw me outside with the drum, with the picket sign, with my loud voice, pressuring visitors not to walk inside a boycotted hotel. On my first night back I noticed the awkward feeling of walking into that group of people who had crossed the picket line. They offered me nothing but silence, but when I walked into a group of strikers — I was one of them.

Amazing how quickly it has all turned into West Side Story without all the choreography. One of my coworkers and I don’t speak any longer. The only means of communication we have is an old Words with Friends game that we have kept going, despite our differences.

The oddest experience for me has been to serve the hotel’s RH restaurant guests who were verbally harassed on the sidewalk outside the hotel. Yesterday, I was yelling, Shame on you! and today I am asking how their duck confit is, and would they like another glass of wine. One very nice but overly tired looking Australian couple asked me what the strike was all about. I simply informed them that I felt like I had more freedom of speech off the clock than on it, and referred their questions to management.

I have always been a good employee. I’m never late. I don’t have any guest complaints on my record and I believe that I’m an all around consistent team player, but the pressure of having to be extra perfect to avoid disciplinary write-ups is starting to get to me. The managers feel closer in proximity now. Every time I ring up a check for a guest, I go over it three times, just to make sure everything is on it. Did I ring up that extra Pnoir? Did I remove the wine for the YELP discount? Did I remember to decrumb the table before putting down dessert menus? Did I forget any birthdays, anniversaries? I can’t afford any mistakes.

I feel like I have a very large target on my back. I convinced 11 of 15 employees to honor the strike. Out of those 11 people, seven of them had the courage to grab a picket sign and walk with me. I was also pulled onto a truck outside of the hotel to give a last-minute speech to the workers, where the steely gaze of corporate lawyers fell upon me. Paranoid? You bet.

On the last day of the strike, I went to negotiations at the Hyatt Regency in Century City and was allowed to speak at a packed banquet room where both parties — our Unite Here Local 11 and Hyatt managment — are still sorting out their differences and trying to agree on a new contract. The new general manager, Philip Dailey, was kind to me and other Andaz employees, upon seeing us there, yet I couldn’t help but think that this was the moment for him and me, where the gauntlet was thrown down. We shook hands and sat at opposite sides.

At the beginning of the week I gave Local 11 permission to use my face to get more support for our proposals. Friday, a day after the negotiations had gone sour. I came into work to see my picture plastered all over the hallways. These were union leaflets printed to rile up the employees, to show them our proposals had been negated. I felt like I was looking at a wanted poster, except for the fact that I wasn’t wearing a cowboy hat, there was no reward, and everybody knew exactly where I was. Isaac, the union rep, posted a flier near the stewarding room. The restaurant manager quickly took it down.

Part of me wonders what I’ve gotten myself into, and the other part realizes that if I’m to succeed next time at negotiations I’m going to have to learn to be a thorn in management’s side, while doing my job perfectly and adhering to the rules. I’ve never played a role like this, but I’m willing to try.