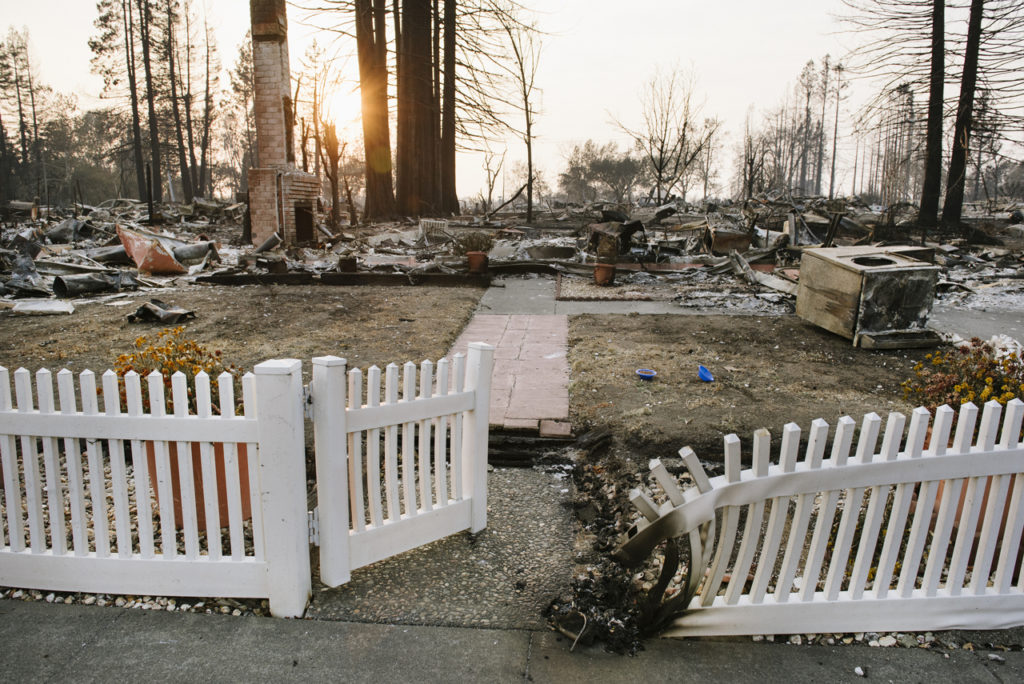 For undocumented immigrants who have lost jobs or homes in the Northern California fires, the road to stability will be especially steep. Many are ineligible for federal aid of any kind.

By 11 o’clock in the morning, as smoke billowed down a nearby hillside, Tesorito began to wonder if he ought to be in the vineyards. It was Monday, October 9, and he was harvesting wine grapes near the town of Sonoma. He was accustomed to the challenges of the job: the cold mornings, the snakes that hid beneath rocks and the double shifts during harvest time, when he could labor upwards of 90 hours a week. But when he paused to look north, he saw something he’d never seen before: a wall of flames.

Tesorito pointed the flames out to his friend, Lalo, a row over. Though both men could feel the heat on their faces, they turned back to the grapes. This was la pisca—the harvest—when they were paid by the amount of fruit they clipped, so every second counted. They had left for work at 5 a.m. and hadn’t heard about the fires that had begun to spread across Sonoma and Napa counties. At one point, Tesorito realized that the flames threatened to encircle the vineyard. In an instant, he and the rest of the panicked crew bolted for their cars and raced down the bumpy country road, using their windshield wipers to push away the falling ash.

“It was crazy, absolutely crazy,” Tesorito said in Spanish. He cleared his throat, which had gone raspy. He had picked up a hacking cough from the smoke, which he couldn’t seem to shake. It was a Saturday in late October, and he and Lalo were seated on folding chairs in the middle of a school gymnasium in Santa Rosa, attending a Spanish-language meeting about resources available to people affected by the fires. They hadn’t worked in two weeks, because roads to the fields were closed.

“My rent’s due soon and I don’t have it,” Tesorito told me. The 37 year old is short and stocky, with broad shoulders and callused hands. Lalo is 58, though he looks at least 10 years younger. Collectively, the friends have spent more than two decades in California’s famed Wine Country, part of an immigrant workforce that props up the state’s $57 billion a year industry.

“Everywhere we go, people have told us, ‘If you don’t have papers, we can’t help you.’ There is nothing for us.”

Both men are undocumented Mexican immigrants, but tell me that until recently their status hasn’t been much of a concern. (“I don’t cause problems and I do good work,” said Lalo.) The fires changed that. Neither man is eligible for the various forms of federal disaster aid, which ranges from unemployment benefits to housing assistance. This was their fourth meeting in eight days of searching for anyone who might be able to help.

After sitting through the 90-minute forum, the men approached a table staffed by a representative of a local Legal Aid office and explained their predicament, but while the woman listened politely, she had no advice for them. “Everywhere we go, people have told us, ‘If you don’t have papers, we can’t help you,’” Tesorito said as he walked out. “There is nothing for us.” 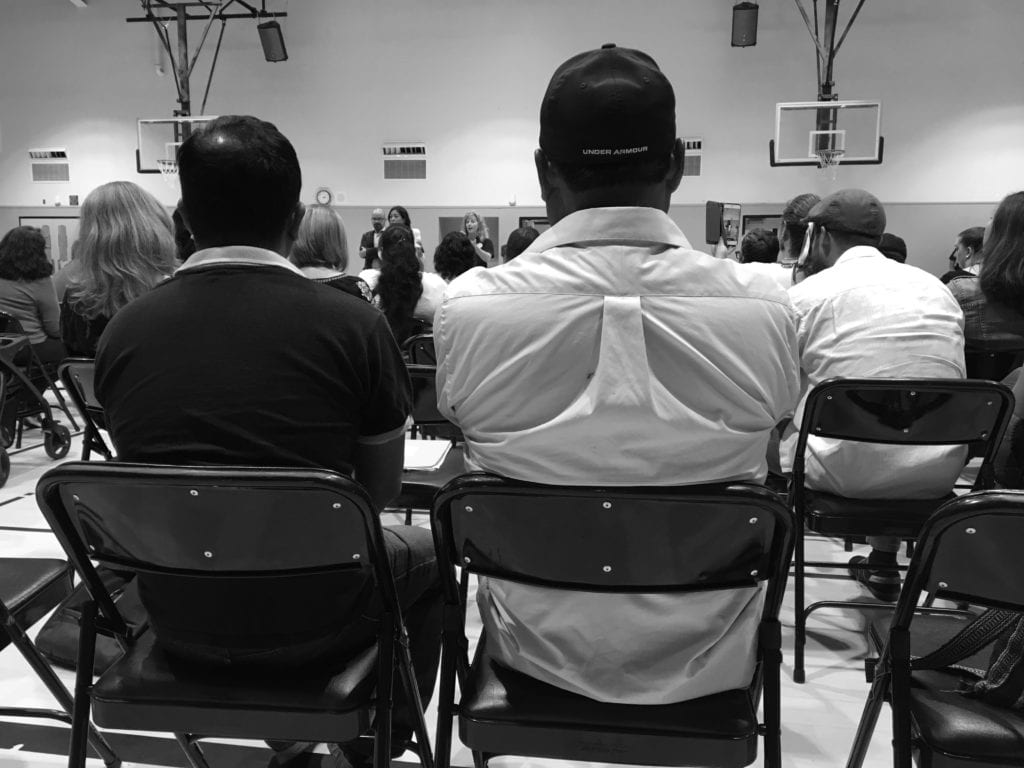 The Nuns Fire that nearly engulfed Tesorito and Lalo was the largest of the recent California wildfires, consuming 54,000 acres, destroying at least 1,300 buildings and killing two people. But it wasn’t the most destructive. The Tubbs Fire, which began outside of Calistoga and roared south into Santa Rosa, killed at least 22 people and transformed entire neighborhoods into surreal hellscapes. The various Wine Country fires turned the sky black for days and rained ash across the Bay Area, sending folks scurrying to the nearest hardware store in search of protective masks.

For undocumented immigrants who have lost jobs or homes, the road to stability will be especially steep. Many are ineligible for federal aid of any kind. Others may qualify for assistance if they have children who are U.S. citizens, but that would require turning over personal household information to the federal government. 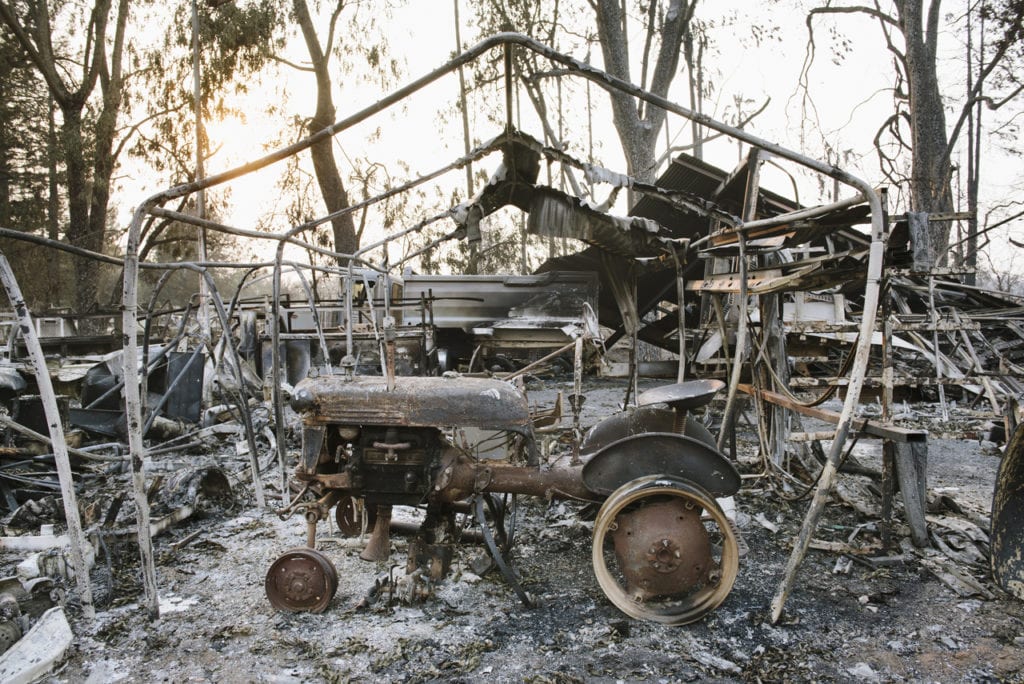 At the forum, one audience member asked an official from the Federal Emergency Management Agency to promise that it wouldn’t share information with Immigration and Customs Enforcement. The official stated that FEMA had never done so in the past, but that he couldn’t guarantee that it wouldn’t happen in the future. Several days earlier, ICE’s acting director, Thomas Homan, released a statement that appeared to link the wildfires to the unrelated arrest of an undocumented immigrant. In response, Sonoma County Sheriff Robert Giordano slammed Homan’s statement as “inaccurate” and “inflammatory.” (Breitbart News also reported — then retracted — that the undocumented immigrant was suspected of starting the wildfires.)

The forum, which was attended by about 100 people, was held in Roseland, a neighborhood just south of downtown Santa Rosa. This is the heart of Sonoma County’s Latino community, and although the fire didn’t reach Roseland, the neighborhood has been deeply impacted. A day earlier, I had visited Roseland’s library, where dozens waited to speak to representatives of the Mexican consulate. One woman, Trinidad, said that her husband was a gardener and that the homes of half his clients had burned down. Another woman, Nayeli, cleaned five large homes; all five had burned down. It went like this down the line: dishwashers, hotel housekeepers, landscapers and nannies, all without work because their workplaces no longer existed.

Less than a mile from the library, Jonathan Bravo sorted through food donations at Bayer Farm, a community garden that has become a refuge for immigrants during the fires. “The tragedy has been immense,” said Bravo, a 63-year-old former math teacher in Mexico. “People are scared, especially our undocumented residents. We try to tell them: Don’t have fear. We are all together on the same boat.”

Several days after the fire started, Bravo and a group of volunteers began feeding meals to anyone who showed up. “We couldn’t just watch the smoke—we needed to respond,” said Bravo. On the first day, they served eggs, beans and handmade tortillas to 30 people. The next day, they fed 80. Since then, they’ve dished out three meals daily to an average of 250 people, all cooked by volunteers. As word about the meals spread, donations started to arrive: organic produce from the food bank, bread from a local bakery, checks to defray the costs of running what amounts to a restaurant for the unemployed.

One recent donation came from the Graton Day Labor Center, located in the small town of Graton, west of Santa Rosa. “We serve the people who fall through every safety net—the day laborers and the domestic workers,” said director Christy Lubin. On the other side of the office, a group of men chatted quietly in Spanish, hoping to be sent out. “We’ve only dispatched 12 folks today, when we’d normally send out 25 or 30,” Lubin said. 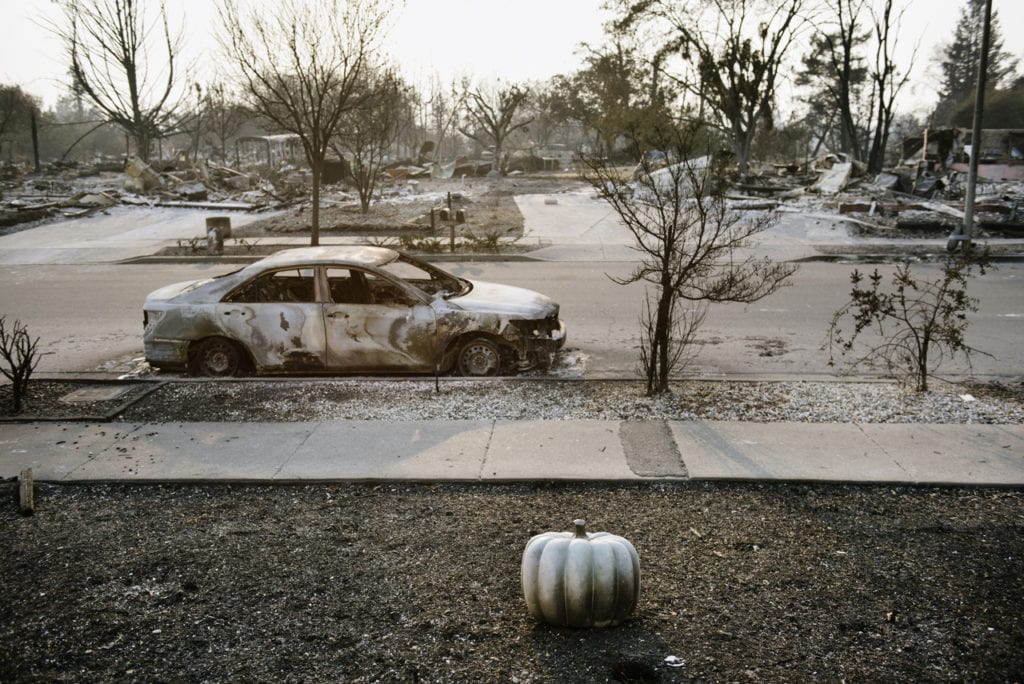 Donations soon began to arrive from people who knew that the day labor center could get money into the hands of people who needed it. “We gave out about $5,000 in cash—just money for cellphones, gas and food,” said Lubin. “But people wanted to give more, and so I thought, ‘What are we going to do?’” Together with the North Bay Jobs with Justice and North Bay Organizing Project, Lubin launched UndocuFund to provide disaster relief to undocumented immigrants. Within 24 hours they had raised more than $100,000. To date, they’ve brought in $750,000. The fund, whose advisory committee includes undocumented immigrants, will soon begin to accept applications for financial assistance. 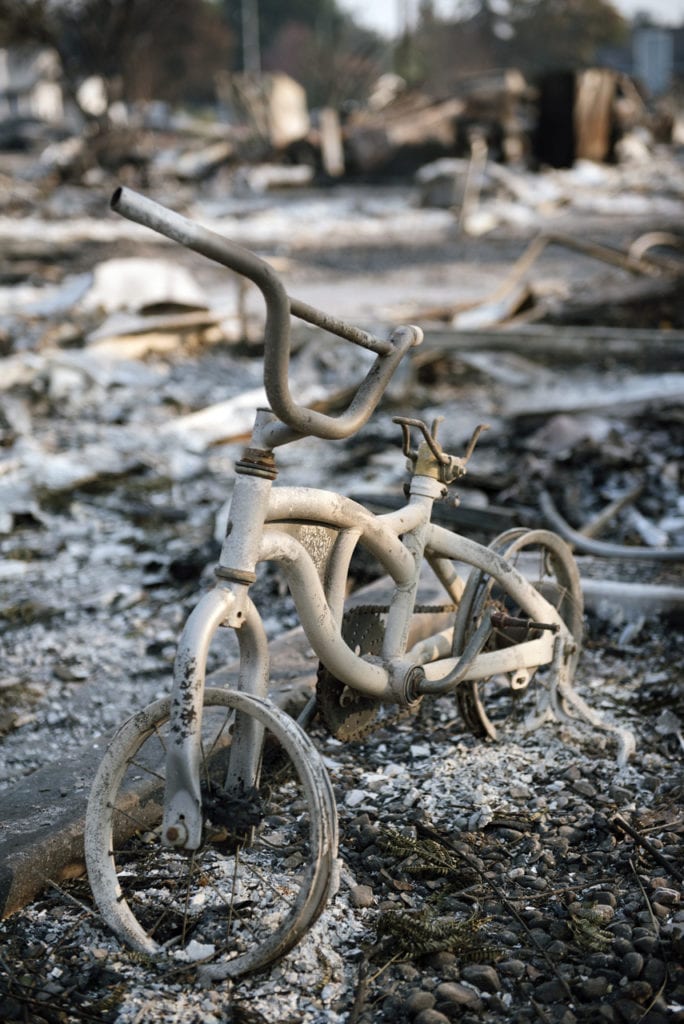 At Bayer Farms, about 50 people were seated at picnic tables eating dinner. This was the 11th day that the garden had provided free meals to the community, but with school starting back up soon, it wasn’t clear how much longer the experiment would run. Jonathan Bravo had also started to get pressure from the city, which wasn’t entirely pleased about the unlicensed operation.

Not that he had any regrets. “We say that we don’t grow tomatoes or lettuce, we grow people,” he said. The fire had provided a chance to prove it. He picked up a walnut from the ground, cracked it open, and handed me a piece. The nut was from a black walnut tree that rose high above the garden. Bravo told me that last year, nearby construction had damaged the roots of the tree, and an arborist had suggested that they cut it down while the wood was still salvageable. Instead, they decided to see if they could nurse the tree back to health. Each week, classes of schoolchildren work in the garden, and when they learned that the tree was sick, a few made a habit, before leaving, of speaking words of encouragement to the tree and giving it a hug.