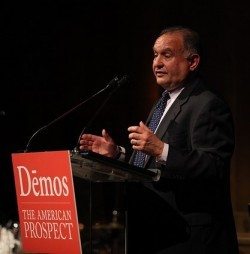 At a small gathering in Los Angeles last week, Miles Rapoport, president of the 13-year-old progressive think tank Demos, declared that although the U.S. economy is struggling at best, the gap between rich and poor is ever-widening and a host of other seemingly intractable problems are worsening, we’ve arrived at a key historical moment: Everything we need to address these crises is at hand.

Demos is also an institutional platform for leading and emerging writers and thinkers. Its Fellows Program includes Bob Kuttner, Bob Herbert, Nomi Prins, Richard Benjamin and David Callahan. Its reports are often cited in the media, and Demos staff and fellows, including Miles and vice presidents Heather C. McGhee and Tamara Draut, appear regularly on radio, TV and in other media.

Miles’ talk and the ensuing discussion were inspiring, but some of us remained skeptical. I wanted to know specifically why Miles is a true believer, as opposed to so many public figures who purport to offer hope simply by saying “I’m an optimist!” or “I have to be optimistic to do this job” (or “write this book” or “run for this office”).

Following is Part 1 of a follow up Q&A in which Miles elaborates on his optimism.

What gives you confidence that that the gap between the 99 percent and the one percent can be reversed, given the march of technology, job outsourcing and other structural changes that benefit the bosses at the expense of the middle class and the poor?

Miles: After World War II, a set of conscious policies and investments, made possible by a consensus among business, labor and government, brought unprecedented prosperity and created a broad middle class. Beginning in the ’70s, business withdrew from that consensus, and fought and won policies — low taxes, deregulation and destroying unions — that created vast wealth at the top and inequality and insecurity for the rest of us. But that string has now run out. People are realizing that we can’t be a country with a tiny group of super wealthy at the top, economic insecurity for the vast majority, and low wages and poverty for over 30 percent or our people. Fast food walkouts and California’s new $10 minimum wage are harbingers, but the conversation is taking place throughout the country and is gathering steam.

The Left has the values and policy prescriptions to right the ship, but has been less than successful in bringing that message to a majority of Americans. Is that changing?

Miles: For 40 years, the Right has successfully practiced wedge politics, carefully repeating messaging to create “others” who were outsiders and “less than” to keep the majority of people in support of the status quo. But changing demographics, widening insecurity for so many, and the rigidity and exclusion politics of the Republican Party are making those politics hollow caricatures of themselves. A new coalition is taking shape — immigrants, young people, unions, communities of color, women and democracy advocates — that will change those politics forever.

While in L.A., you attended the AFL-CIO Convention. Why doesn’t the diminution of unions and labor organizing in America put a dent in your optimism?

Miles: The AFL-CIO Convention was a very interesting case in point. The AFL has long had the reputation of an exclusive, mostly white organization principally concerned with its own members only. But this year was welcoming, diverse in age, race and gender, and the unions committed themselves to supporting immigration reform, LGBTQ rights, campaign finance reform, reproductive choice and much more. There was a fundamental recognition that they had to change and that all of the 99 percent had to come together. If they do, it truly will be an unstoppable force.

Voter suppression efforts have metastasized all over the country. How can things get better as long as the neediest Americans don’t or can’t vote?

Miles: Yes, voter suppression is the last refuge of scoundrels and they are still swinging for the fences. But in the 2012 elections, highly successful efforts were waged to fight back against these efforts and the pushback was successful. In 13 of 16 states that passed restrictive voting bills, all but three were set aside — by the courts, by referendum or by the Justice Department. Turnout was higher than expected and President Obama was re-elected. We now are working on an affirmative agenda to enforce the National Voter Registration Act — including at the new Health Benefit Exchanges — enact Same-Day Registration and pass other voter access reforms. I think these trends and more robust voting, will continue.

I Was a Communist in Bill O’Reilly’s Dreams