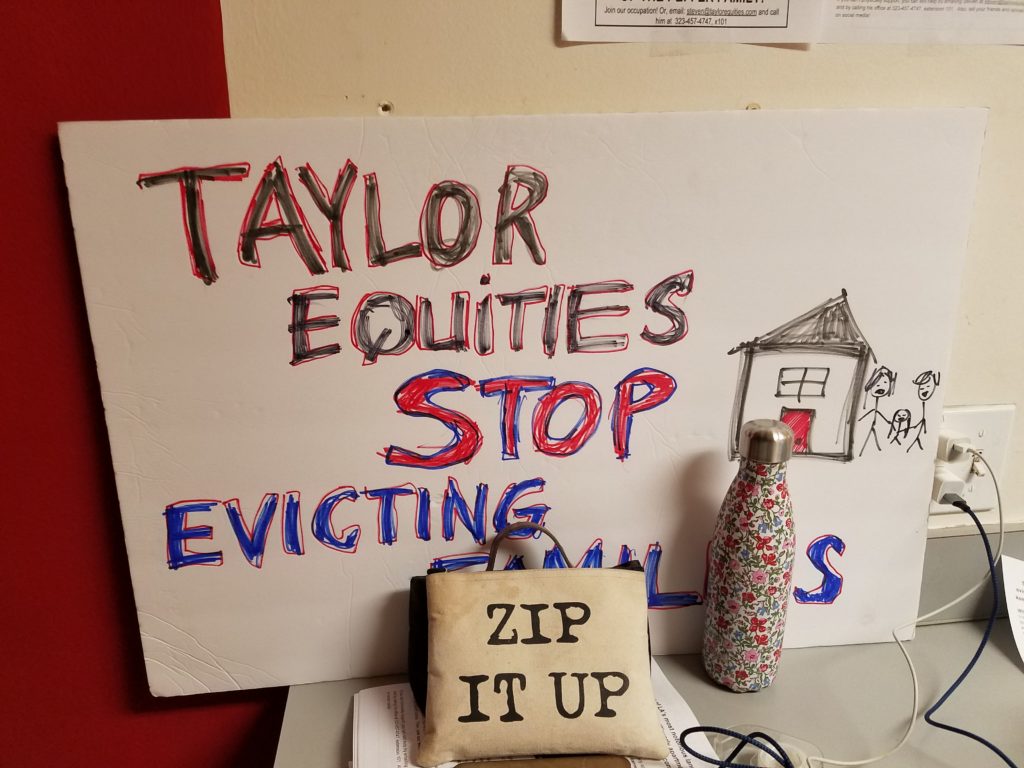 An estimated 30,000 eviction cases are filed in court each year against Los Angeles city residents, with nearly a million cases filed nationally in 2016.

It was the last evening that 7-year-old Madeline Peffer would spend in the only home she had ever known. She indulged a reporter with a tour of her now-empty bedroom — a converted closet that had fit a canopy bed, dresser and table, and that had recently been the happy scene of fort-making with a friend.

The walls were colored with chalk, a form of art therapy that her parents had allowed in the wake of their impending eviction from this apartment in Silver Lake, the trendy Los Angeles neighborhood that has become increasingly out of reach as a home for the artists and musicians who have given the area its luster.

Exuberantly drawn hearts and stars, and the proclamation “Madeline’s Amazing Cool Room,” said as much about the wrenching nature of the proceedings as the signs that tenant activists would carry in a street protest later that evening.

White households have lower eviction rates than African-American households, regardless of education, according to a survey from Apartment List.

Los Angeles-based Taylor Equities’ purchase of the 36-unit building last March was followed by renter complaints of harassment and disruptive construction, and the departure of tenants, a dozen of whom had their leases terminated by the new owner “without cause.” In May a dozen tenants, including the Peffer family, received a 90-day “notice to vacate” their apartments. Because the Waverly apartments are not covered by the city’s rent control ordinance, the tenants can be evicted without cause in what is called a no-fault eviction.

What happened at 2965 Waverly Drive is hardly unheard of in a city known for low wages, high rents, and housing and homeless crises that have left thousands in the street. An estimated 30,000 eviction cases are filed in court each year against Los Angeles city residents, with nearly a million cases filed nationally in 2016.

Perhaps what makes the Peffer family’s story different from those of many families who face an eviction is that Madeline’s parents are professionals. They are also white and native to the U.S. (White households have lower eviction rates than African American households, regardless of education, according to a survey from Apartment List.) The Peffer family also made the choice to fight their removal from their home in court.

Activist Lawyer: “You can live somewhere for 15 years or 50 years and your old or new landlord can decide that they want to evict you and that’s it.”

Noah Grynberg is a partner at the Los Angeles Center for Community Law and Action in Boyle Heights, a mostly Latino, heavily immigrant neighborhood that has faced its own gentrification battles. Grynberg’s clients, some of L.A.’s poorest residents, are asked by his group to pay for their eviction defense by participating in tenant organizing, including by engaging in collective bargaining with landlords.

He believes the housing crisis will be tackled more quickly if families who have choices, like the Peffers, battle for tenants’ rights. “Unfortunately, people take notice more often.”

In an email to Capital & Main, Steven Taylor, 2965 Waverly’s new landlord, rejected tenant-rights activists’ charges that he harasses residents or that his business practices are contributing to the housing crisis. Taylor Equities, he wrote, has invested “hundreds of thousands of dollars” in the Waverly Drive apartments, installing security cameras, replacing windows, adding laundry facilities and updating plumbing. “Unfortunately, it’s just not possible to do that kind of work without some disruption.” Taylor Equities owns at least a dozen apartment buildings in Los Angeles. 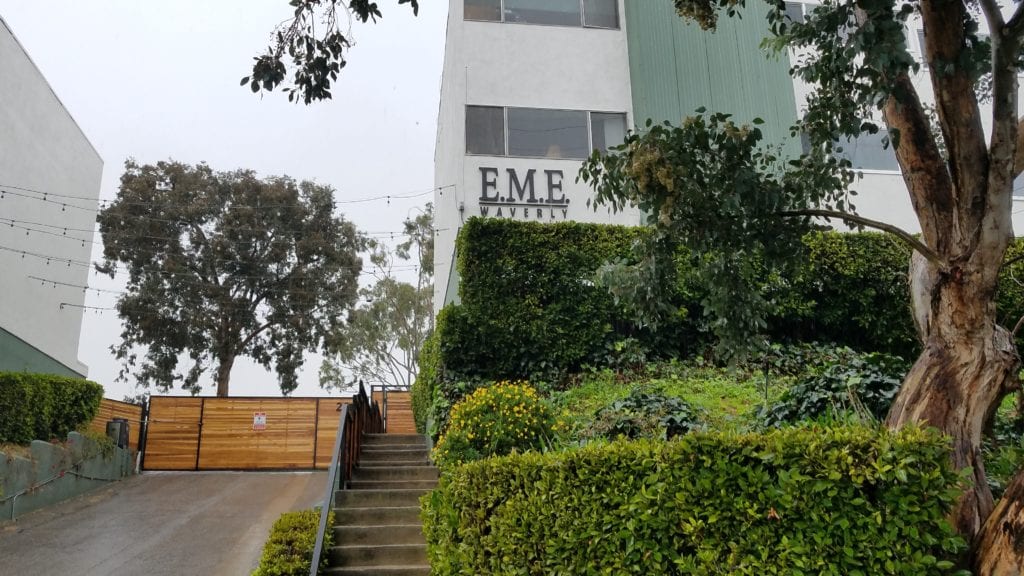 Taylor has come under fire before, from Los Angeles City Councilman David Ryu, who alleged that Taylor intimidated Los Feliz tenants living in another of his company’s buildings. Taylor is known for acquiring properties, making upgrades and then seeking out higher-paying renters. Taylor’s “whole M.O. is to displace low-income families to try to bring in wealthier tenants to pay his higher rents,” said Coalition for Economic Survival’s Larry Gross, adding that he has organized tenants at more than five of Taylor’s buildings.

The solution to the housing crisis “is not forbidding landlords from fixing up dilapidated properties,” wrote Taylor, who said that tenants at some of his properties include “low-income families, veterans and individuals at risk for homelessness.”

The Peffers had lived for 17 years in their apartment, which is practically a stone’s throw from their daughter’s elementary school.

A fixed-up 950-square-foot, two-bedroom apartment in the Waverly Drive building — about the size of the Peffers’—advertised for $3,450 per month in early February on Apartments.com. The Peffers had paid $1,500 per month before they left and were prepared to accommodate a modest rent increase.

Last April a group of tenants emailed Taylor, introducing themselves as the Waverly Tenants Association, and set off a flurry of internal communications at Taylor Equities. Company director Rick Shugarman assured Taylor in an email, “We have the experience to work our way through this.” Taylor wrote back, “Shit,” adding, “maybe 60 day [sic] notice to quit is better now since 2 bedroom conversion will be public knowledge soon.”

The Peffers had lived for 17 years in their apartment, which is practically a stone’s throw from Ivanhoe Elementary School, which Madeline attends. Melinda Peffer appreciated being close to the school because her daughter suffers from osteogenesis imperfecta, a congenital condition that predisposes her to breaking bones.

Madeline has watched her mother emerge as a leader in the building’s tenant union that formed last spring, as she hosted weekly meetings in the living room of their apartment. She said, “I’m glad that she’s doing it, but it’s also sad because she’s spending all her time doing it and she gets into these arguments with my Dad because she’s too stressed.”

Harassment and “cash for keys” arrangements, in which landlords buy tenants out of their leases, are a major source of displacement in the city.

She has told only one friend from school about the eviction, a friend whom she knows can keep a secret. “Everybody is going to say it’s not true because it’s never happened to them,” said Madeline, as she ate popcorn from a cup.

Grynberg describes the no-fault eviction procedure that the Peffers faced as “one of the most expedited legal processes that we have in California.” In early December, Grynberg attempted unsuccessfully to use Taylor’s email exchange with Shugarman as evidence that the company had retaliated against the Peffers for their participation in a tenants union. But their case failed to persuade a jury.

“You can live somewhere for 15 years or 50 years, which is the case for some of my clients, and your old or new landlord can decide that they want to evict you and that’s it,” said Grynberg.

The Peffers may be more privileged than some of the city’s embattled tenants, but their ordeal—and their decision to become tenant activists—has taken a toll.

Overall, Los Angeles County has a lower eviction rate than the rest of the country, according to Princeton’s Eviction Lab. But that is no reason to celebrate, said Gross, who added that harassment and “cash for keys” arrangements, in which landlords buy tenants out of their leases, are a major source of displacement in the city.

Melinda Peffer has been moved by the stories of other tenants she’s met through her participation in the Los Angeles Tenants Union, an all-volunteer organization that formed in 2015 and now has eight chapters citywide. Their members have organized rent strikes and protested noisily outside landlords’ homes — including Taylor’s last November. She spoke of families who face steep rent increases in rodent- and cockroach-infested apartments “without any options whatsoever.”

The Peffer family may be more privileged than some of the city’s embattled tenants. Melinda works as a public relations consultant. Years of paying affordable rent at the Waverly Drive apartments allowed her husband Michael, a drummer, to go back to school and receive training to be a physician’s assistant. But their ordeal—and their decision to become tenant activists—has taken a toll.

On a recent cold and rainy Thursday, Melinda Peffer wore a long coat, a plaid scarf, and low-heeled boots and looked polished enough to dash off to a meeting with a client. Instead, she lit one last fire in the hearth at her empty apartment and played host to half-dozen tenant activists as they waited for sheriff’s deputies to arrive.

She spoke of some of last year’s challenges: the anxiety about whether Madeline would be able to remain in her school, her husband’s worry that publicity about their activism might impede his ability to find a job and their concern that a lost eviction case will make it more difficult to rent an apartment in the future. “I’ve lost business this past year, with the stress,” she said.

For now, the family is “a little bit on top of each other” in temporary digs in Los Feliz that previously served as a short-term rental, said Peffer, reached by phone a few days later. But Madeline loves their new landlady, who learned about their plight after they lost their eviction case in early December. “That’s helped her the most with transition,” she said.

Related Topics:evictionsFeaturedgentrificationrenters' rights
Up Next