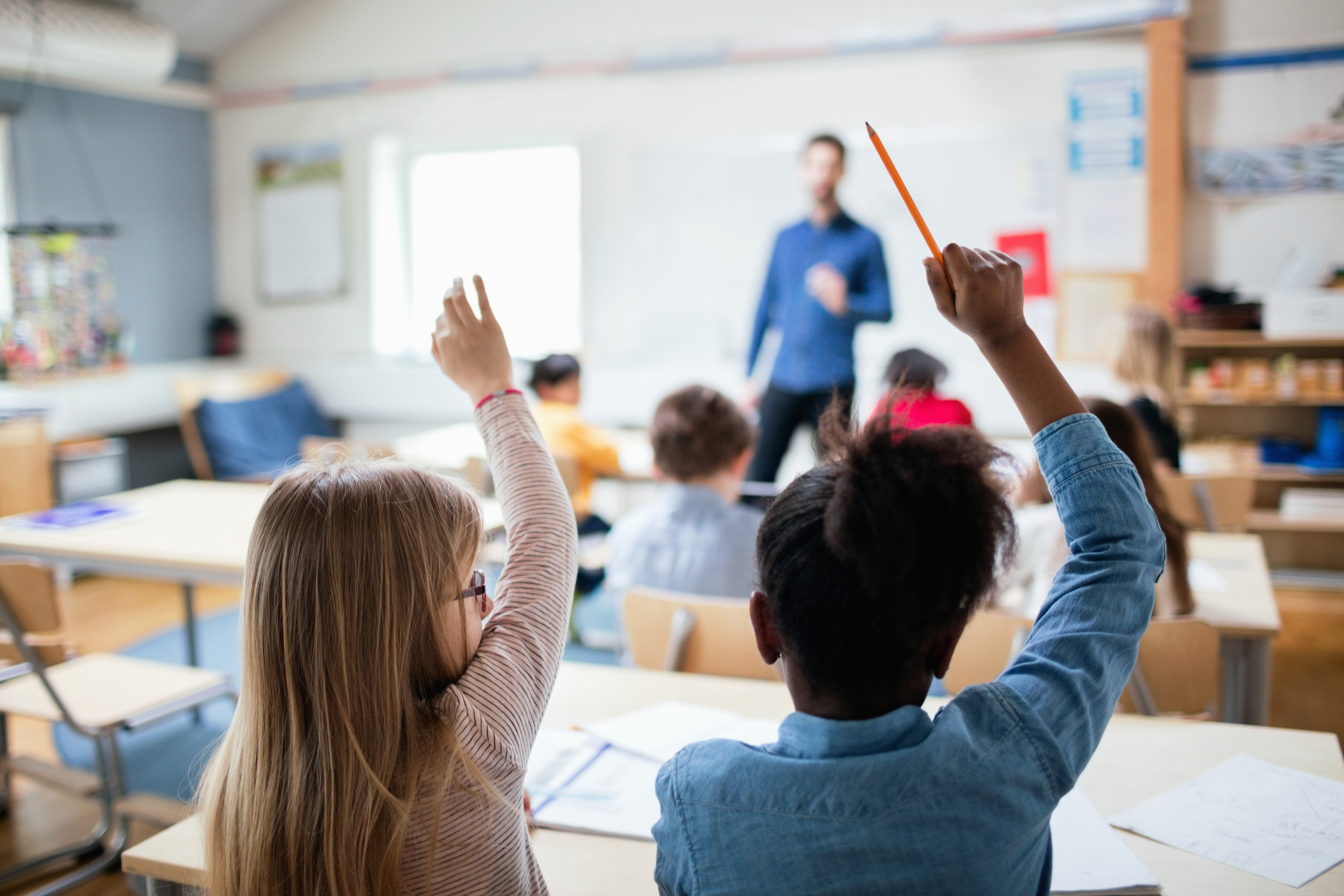 COVID — and the bitter politicization of education — were already lashing Hoover Elementary in southwest Cedar Rapids, Iowa, when the fierce, fast-moving windstorms of a weather phenomenon known as a derecho plowed through on Aug. 10, 2020.

“The school board was supposed to meet that night to determine how to respond to the pandemic,” recalled Hoover kindergarten teacher Kelly McMahon. “We had a double hit.”

Seated in her cheery classroom during a brief break in late April, McMahon gestured behind her, where wind tore off the school’s roof and water gushed into the gym. Across the city of 134,000, three people died, dozens were injured, and more than a thousand households were left homeless — many in the low income, largely immigrant area that Hoover serves. Still, district leaders were determined to stick with their plan to reopen weeks later for in-person classes, and repairs began immediately.

Hoover is a “community school,” and that’s what carried it through, according to principal Clint Stone and the new community school coordinator, Minouche Bandubuila, then an interpreter and parent advocate.

Community schools are public schools that “provide services and support which fit each neighborhood’s needs, created and run by the people who know [its] children best — families, educators, community organizations, local governments, and the students themselves,” according to the website of the National Education Association, a teachers union that has supported the movement with funding and a continuing public relations push.

Dena Donaldson, who leads work on community schools at the other major U.S. education union, the American Federation of Teachers, said the model reaches well beyond improving access to social services. (Disclosure: The NEA and AFT are financial supporters of Capital & Main.)

“It creates a whole different dynamic, particularly when you’re looking at more struggling schools,” she said. “Maybe there is going to be a clothing closet and food bank. That helps alleviate the stress that our students feel when they’re in the classroom. When they’re feeling [hungry and worry about being homeless], it’s hard to get them to focus no matter how good of a teacher you are.”

“What we’ve seen during the pandemic is that community schools have the partnerships in place that enabled them to respond more effectively.”

The AFT has been putting funds and staff toward promoting community schools for over 14 years, Donaldson said, because the model is “giving our educators agency.” It also stands out for deep research at every school site into both community needs and assets, including cultural resources, and it maintains broad support among both Republicans and Democrats in Congress, she noted.

Anna Maier at the Learning Policy Institute — whose 2017 research showed that becoming a community school fits the federal standard for an effective “evidence-based intervention” that qualifies for funding — rattled off the names of places across the country where a community school provided the resilience required to confront COVID.

These are the four key elements that Maier’s research identified as characteristics of successful community schools:

“Those pillars are what people expect in a good school,” said Maier, leader of the Deeper Learning team at the Learning Policy Institute. “Many affluent schools already provide these things, and parents [there] assume they will.”

In that way, turning a public school into a community school is a significant step toward equity, she said.

“What we’ve seen during the pandemic is that community schools have the partnerships in place that enabled them to respond more effectively,” Maier said. “You have partnerships, you have relationships and communication with families, and you know the resources. Having those connections in place allowed them to be more nimble.”

A 2019 study of a school in New Mexico found that every dollar spent on a community school coordinator can produce more than $7 in benefits. LPI uses a figure of $15.

“It doesn’t have to be a big corporate donor pumping in a ton of money or a wealthy charitable gift,” said Dave Greenberg, a former high school social studies teacher in Las Cruces, New Mexico, and now a community school promoter and trainer with the NEA. “It could look like families donating their time and their expertise in different cultural traditions or enrichment activities. … Community schools provide a lens to understand; we ask who in the building has different assets that we haven’t tapped into.”

“The visionary explanation is that they’re following through on the promise of what a public school is supposed to do and supposed to be.”

~ Jeremy Mohler, In the Public Interest

There are now 5,000 community schools across the country. That’s still a small share of the nation’s 98,755 public schools, as estimated by the National Center for Education Statistics. But federal funding for community schools has risen has risen from $9.7 million in 2015 to $75 million in 2022, and several states are spending that much or more on their own.

Community schools, which started proliferating a decade ago with new private and union funding, stand on the shoulders of education theories and reform movements dating back more than a century. But they do not follow a prescription. The four pillars, Maier said, are simply the shared characteristics that describe successful community schools. In fact, NEA is now advancing a set of six pillars that are more aspirational:

Either way, each community school is created from the ground up by local leaders based on local input, in line with the deep-seated American tradition supporting state and local control over education. A school may have an active parent organization or a student health clinic or a commitment to community partnership, but leaders of the current movement say the single most important element of a community school is its coordinator. (And the coordinators, in turn, can find support in the national community school coordinator network, run by the national Coalition for Community Schools.)

Here’s how Jeremy Mohler — communications director with In the Public Interest, a policy nonprofit that promotes public institutions and opposes privatization — breaks down community schools.

“The visionary explanation is that they’re following through on the promise of what a public school is supposed to do and is supposed to be,” he said. “The nuts and bolts explanation is that usually just one staff member is added, using grant funding, and that person does the needs assessments. Through the relationships that person builds, that person starts working with students, parents and school staff to propose solutions.”

Yolanda Tafoya is that person at Arrey Elementary, a rural school in New Mexico serving just 97 students aged 3 through fifth grade 20 miles south of Truth or Consequences (“T or C” to locals). More of all kinds of people have been participating and helping out since Arrey became a community school.

The most obvious change from the community’s vantage point may be that farmers now regularly donate sod and other supplies to beautify the campus. But inside of classrooms the biggest news has been the mentors (older students from other public schools in the region) now being paid with funding from a community group.

“Teachers come together each week,” said Tafoya. “Since we have had the mentors in there, grades have increased. Teachers are in there alone, and they need help.”

“After a student is registered, we build a relationship with each family. We get to know their issues, understand their housing, transportation and if they have food insecurity.”

Tafoya established a food bank at the school, driving supplies down from T or C herself. She has put out information on social media and linked parents who are seeking jobs, housing or child care with the appropriate resources. And the pandemic’s impacts continue to ripple through the farming community; a dairy that employed seven parents and housed their families closed in April.

“It’s almost like my dream job,” said Tafoya, a former case manager and before that a nurse’s aide. “Bringing people together and making connections.”

McMahon, the kindergarten teacher in Cedar Rapids, called the community school “a streamlining of support.” Her school, too, has a new food bank, and Bandubuila and her predecessors as coordinator have visited every Hoover family at home, linked families with mental health providers and amplified parents’ voices. But the most important changes, they say, have been in communication methods and styles. Bandubuila, whose fourth language is English, has been amplifying the voices of immigrant parents in ways they never had been heard before. And McMahon has learned to change how she communicates.

“Instead of having the parent match us, we match them, asking about previous experiences, explaining why we come to kindergarten — instead of having an approach where I am a know-it-all,” McMahon said. “I am more of a listener now, [asking,] ‘What would be an activity that you would come to our school to participate in?’”

In fact, the whole process starts with separate surveys of the needs and assets of students, families, community groups, local employers and others. This information enables the school to engage with employers, churches, community groups and families based on their strengths, and each may gain from the others. A business might provide resources but also find employees, for example.

“After a student is registered, we build a relationship with each family,” Stone said. “We get to know their issues, understand their housing, transportation and if they have food insecurity. The school is a hub.”

So Hoover Elementary had a range of community support in place when the derecho hit.

“When that happened, we went door to door to find out how everyone was, what they needed. We had a hub at a local union hall two blocks away and helped get people there who needed mental health support, clothing, food, resources like diapers,” McMahon recalled. “And so many [Hoover families] lost their homes; apartments and houses were just destroyed with trees knocking them down.”

What’s been lost in some school districts in the rush to “return to normal” is front and center in a community school, said Greenberg: “How do we rebuild education systems so they’re more just and more democratic. Community schools are essential so we don’t go back to an unjust education system.”

“We are still at the tip of the iceberg [of what community schools can do],” Stone said. “I am really excited to see what this is going to look like.”