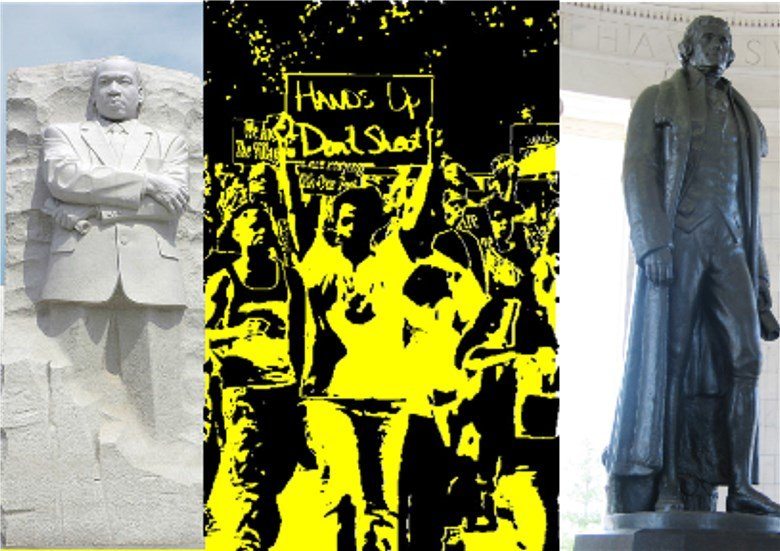 My wife Susan and I have just returned from a three-week trip to the East Coast. The journey included a week or so in Washington, D.C., which Susan had never seen and which I have not visited in a couple of decades. Our purpose was to witness the graduation of a nephew, but we also had time to visit the various monuments that cover the core of the city. These memorials invariably quote some of the masterpieces of our heritage, a reminder of the values that ground the American experiment in democracy.

We left Los Angeles as Baltimore’s social upheaval was erupting – during the same week that marked the 23rd anniversary of the so-called Rodney King riots here. It felt appropriate that on our first night, following dinner in a gentrifying neighborhood of the Capitol, a friend took us to the Martin Luther King Jr. Memorial. He said it was best seen at night, bathed in floodlights, but almost empty of people. He was right. It was a sacred moment.

The monument is three massive pieces of white granite, the tallest 24 feet high and in the shape of a mountain. The center piece stands between but just forward from what would be the two flanking sides. Chiseled into its face is the profile of Martin Luther King, and below it, a line from one of his speeches:

OUT OF THE MOUNTAIN OF DESPAIR,
A STONE OF HOPE

Several days later we stood on the steps of the Thomas Jefferson Memorial and gazed across the Tidal Basin toward the King monument. We had read the stirring words of Jefferson’s Declaration of Independence, etched into the interior wall. Now we witnessed the contradiction. While Jefferson announced to the world that “All men are created equal,” he clearly did not see that such a declaration included people of color or even white women. That notion was opaque to him. By happenstance or design, the blindness of our Founding Fathers reveals itself in the juxtaposition of the two monuments across the water from each other. From the Jefferson Memorial the MLK monument looks like a solid “mountain of despair” – no “stone of hope” stands out.

Two weeks passed before I was home again and began rummaging through a few thousand emails. Among them, I found a message from a friend who had visited a current exhibit at the Autry National Center here in Los Angeles. The Autry museum’s display focused on the Civil War and the West. But my friend was distressed that it was mostly about white Southern sympathizers and their resistance to ending slavery, with the few references to slaves themselves as “stealing, killing and running away,” as she described it. Even more disturbing was the discovery that in the gift shop you could buy your seven-year-old a Confederate cap complete with a Stars and Bars flag on top.

This too is how our racism remains opaque to us. We white people and the institutions we run apparently cannot see the world as others see it, as we have been reminded often this past year. Not just in Baltimore, but on Staten Island and in Ferguson, and on the mean streets of Los Angeles.

As Jelani Cobb wrote in the New Yorker, the killing of black men by police is a symptom of “an entire web of failed social policies on education, employment, health and housing.” This web of failure is grounded in our racism – both the kind that pits one ethnic group against another, and the kind that socio-economic isolation keeps us from bridging – so it remains hidden and obscure to us.

Jefferson could not see this, just as the Autry apparently cannot see, just as we cannot see, even when we say the right words.

Ferguson, MO image detail from a photo by Loavesofbread
Related Topics:Op-Edopinion editorial
Up Next

In Their Own Words: Pension Disrupters Speak