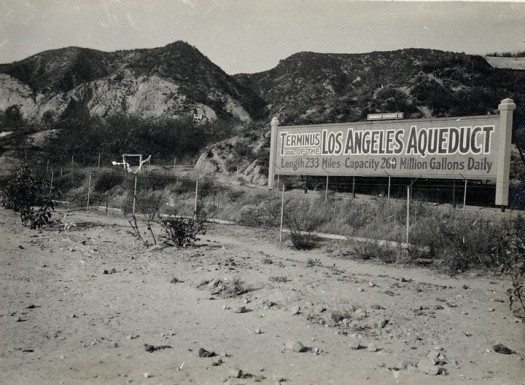 –Orson Welles in The Lady from Shanghai

But there is no water.

The oldest Mercedes in California adorns

the crowded foyer of the L.A. County Museum

in the elevator that lowers my daughter

and me to the basement.  There, among the faint,

intermingled drifts of ammonia and urine

luring the shadows over the inventions of Edison

and Bell, and dusty monuments to a century

whose perusal has been assigned to my daughter’s

and covered with cracks, the fault lines of heaven,

it is soon to be hauled off with the duplicate

large as a god’s over buildings, across avenues

and boulevards from Vignes to Macy, then back

around the to the borders of Beaudry and Eighth Street,

in the Tiptop Diner and made tomato soup

from a free bowl of hot water and catsup.

Across the street was the office of the L.A. Times

to steal the water from the Owens Valley.

Our farm became a scrap yard of rotted pears,

And turned to sage.  A thousand lives in ruin

from desert into orange groves, and overnight,

made a fortune for the city fathers.  One day

our hayrack caught fire and there was hell

in the air.  On the roof, my father saw

in the distance a Hindu city with camels,

was moving in.  We followed Mulholland’s

aqueduct south to L.A. and the cool dark

of the Pantages Theatre in blazing August

while my father hunted for cheap housing

Each day he rode the classifieds

at Mickey’s Hideout where Franz Wefel

Later, he worked the rigs on Signal Hill

for a dollar a day, slinging the pipe tongs

and coming home smelling of oil and mud.

of evening, that incredible pink and blue

bleeding into night, and the homeless

That summer he was shipped to Okinawa,

to Manzanar near Lone Pine in the Owens Valley,

and I wandered among the jacarandas

and birds of paradise at the Public Library

and plotting revenge.  But I was a child.

at Huntington’s Museum and Botanical Gardens

and imagine the great patron and his pals

looking down on L.A. from the veranda

and sighing, Bill Mullholand made this city,

as the sun pales once more beneath a purple fist.

So, here is the Hall of Records, and Union Station

where my father, returned from the Pacific,

swore that we would head back north again.

showed how the city had progressed beyond

its primitive beginnings, how the open hand

of the law could touch a man in his very bones.

And there, staring back from the west end

of Spring Street, is my daughter learning her lessons

as she bends down for a closer look, pale blue eyes

twin suns above the Department of Water and Power.

Author Note:  Although the story of the Owens Valley/Los Angeles aqueduct is generally well known (and debated) in California, it may be less known elsewhere other than through the film, Chinatown, which is not, obviously, not a documentary but a drama loosely based on the incidents leading to the construction of the aqueduct.  In 1905, encouraged by repeated headlines in the Los Angeles Times declaring a state of drought, citizens of Los Angeles voted for a bond issue to finance the building of an aqueduct from the Owens Valley 230 miles northeast of the city, a project of astonishing proportions successfully carried out by the brilliant, self-taught engineer, William Mulholland.  But the aqueduct was brought not to Los Angeles but rather to the San Fernando Valley a few miles northwest of L.A., where a group known as the San Fernando Valley land syndicate—including the owner of the Los Angeles Times, Henry Huntington, Moses Sherman (a member of the L.A. water board), and other fabulously wealthy men—had purchased thousands of acres of cheap land that would now be worth tens of millions of dollars.  Two years after construction was completed, the San Fernando Valley was annexed to Los Angeles (thus Noah Cross’s famous line in Chinatown, “Either you bring the water to L.A., or you bring L.A. to the water”).  Over the years, the effect upon farmers in the Owens Valley was disastrous, but the economic benefit to L.A. was beyond measure; it would be fair to speculate that without the aqueduct, L.A. today would be a small city about the size of Tulsa, Oklahoma.  In my poem, the story is told from the point-of-view of a former resident (and victim) in the Owens Valley; Franz Werfel, author of Song of Bernadette and friend of Kafka, was part of the European émigré community in L.A. during the late thirties and forties, along with Mann and the others named here; Manzanar was a prison camp for Japanese U.S. citizens during World War II; the Rodney King beating, widely televised, culminated in the L.A. riots of 1992.

The son of a lathe operator, B.H. Fairchild grew up in small towns in Texas and Kansas.  He’s won numerous awards, including the William Carlos Williams Award, Kingsley Tufts Poetry Award, and the California Book Award.