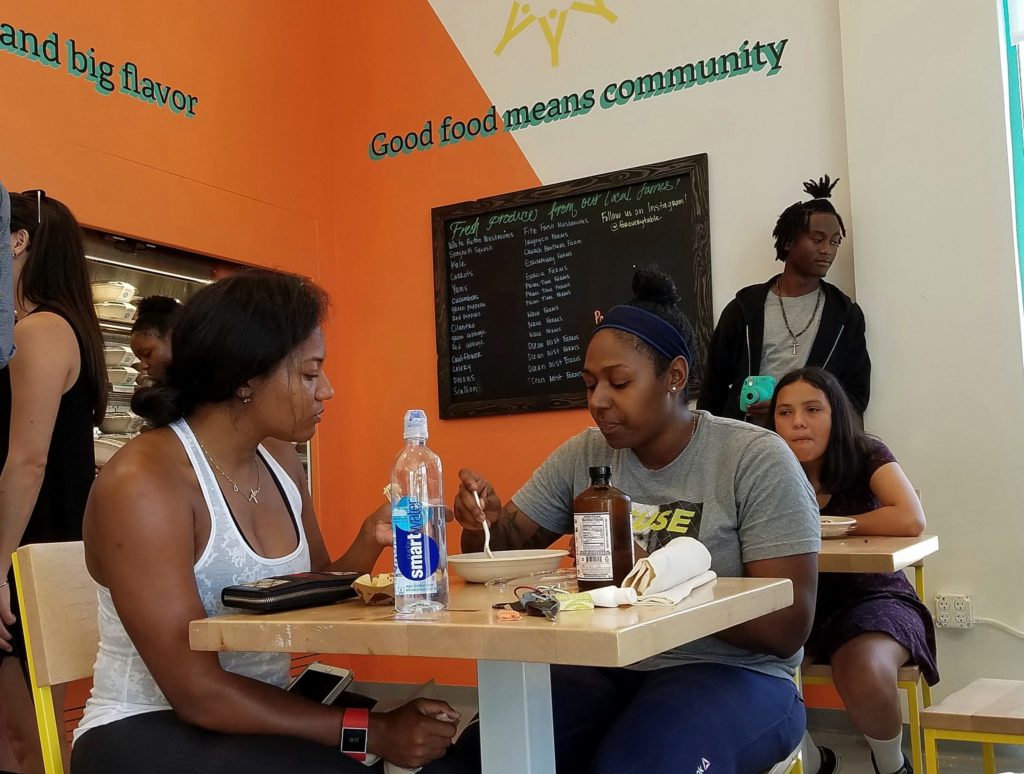 One year after its grand opening, Everytable’s restaurant, at Hoover and 23rd streets in Los Angeles, is buzzing with celebration.

Pizza with cauliflower crust is on offer. The store is full of Everytable enthusiasts of all ages who’ve come to stock up on discounted “grab-and-go” salads and hot meals.

“I love the mung bean noodles,” says Cvonne Smith, an actress/”brand ambassador,” who lives nearby and is soon to leave with some Jamaican Jerk Chicken, served alongside coconut rice and beans, kale, carrots and plantains. Sitting at another table, Bo Gomes and Marley Smith are digging into salad bowls. They belong to a running club sponsored by Everytable. Ricky Porter, a former employee who is now a motivational speaker, chases his one-year-old daughter around the eatery. Everytable’s mission is to put healthy, tasty, affordable meals within reach of people in low-income communities that are beset by fast food and high obesity rates. This makes Everytable unusual, as does its business model, which has customers at its locations in more affluent parts of the Los Angeles area paying more for the same meal than those in lower-income neighborhoods.

“We believe healthy food is a human right and should be available to everybody,” says co-founder David Foster who, along with Sam Polk, is chatting up employees and customers at the Hoover store, located about seven blocks north of the University of Southern California campus.

The chain has already generated a following among those in search of healthy food options, according to a survey of Yelp reviews and conversations with customers.

The meals are designed by a rotating group of high-caliber chefs from such well-known restaurants as Patina and A-Frame, and prepared at a central kitchen in South Los Angeles.

“Our goal is to have an Everytable in every community, especially every underserved community, in the country,” according to Polk.

With more than 60 employees, five locations and about 200,000 meals sold, it’s too soon to say how Everytable will fare in a competitive industry where one in four chain restaurants closes or changes hands after the first year. The company—which must satisfy a slew of private investors—needs to get to scale and achieve profitability – all while maintaining quality and growing a loyal following.

Everytable is already breaking new ground, says Markeze Bryant, portfolio manager of Acumen America, one of Everytable’s investors. He says he does not know of another chain that, like Everytable, meets all the criteria of healthiness, affordability, quality and access for $5.

For Polk, who seems at home schmoozing at the Hoover store, the path to Everytable has  been circuitous. He began his career on Wall Street, where he made millions as a hedge fund trader. Polk, who is 37, recounts his quest for money and status, and his struggles to combat alcoholism and an eating disorder, in an engaging and deeply personal memoir, published by Scribner last year. At the peak of his career in finance, he was ashamed to realize he was made angry by a mere multimillion dollar bonus. Foster, his 32-year-old partner, a Colorado native, comes to Everytable with a less well-chronicled past and a background in private equity.

After Polk left Wall Street, he returned to Los Angeles, his hometown, and launched a nonprofit called Groceryships, which brings together neighborhood moms to study nutrition and learn how to fashion healthy, affordable meals. That move was prompted by Polk’s yearning for a sense of higher purpose and a documentary he’d seen on hunger in America. Foster joined Groceryships in 2014 after meeting Polk and volunteering at the organization.

Two years into the Groceryships venture, while on an Idaho vacation with his family, Polk felt his inner-capitalist speaking to him. Frustrated by the slow pace of fundraising for a not-for-profit organization, he dreamed of doing something on a grander scale. “I was ready to sort of embrace both sides of myself,” says Polk. Foster, on a road-trip honeymoon at the time, agreed to join forces with him.

Whereas Groceryships still struggles to raise $300,000 in a year, Everytable has attracted about $5 million in private investment as of July, according to Polk. It has more than 65 investors, including three largish ones — Dom Capital, a Chicago-based restaurant investor; Lerer Hippeau, a New York-headquartered seed-stage investor and Acumen America, a social impact investor based in San Francisco.

A key feature of Everytable is its “variable pricing” – the company charges customers different prices depending on the income level of the restaurant’s neighborhood. At its Hoover location, where the median per capita income in the area is less than $29,000, the Southern Barbecue Chicken costs $4.95. That same meal, purchased on the Third Street Promenade, where the median per capita income is more than $59,000, costs two dollars more. This pricing scheme is intended to allow the company to be profitable at every store. 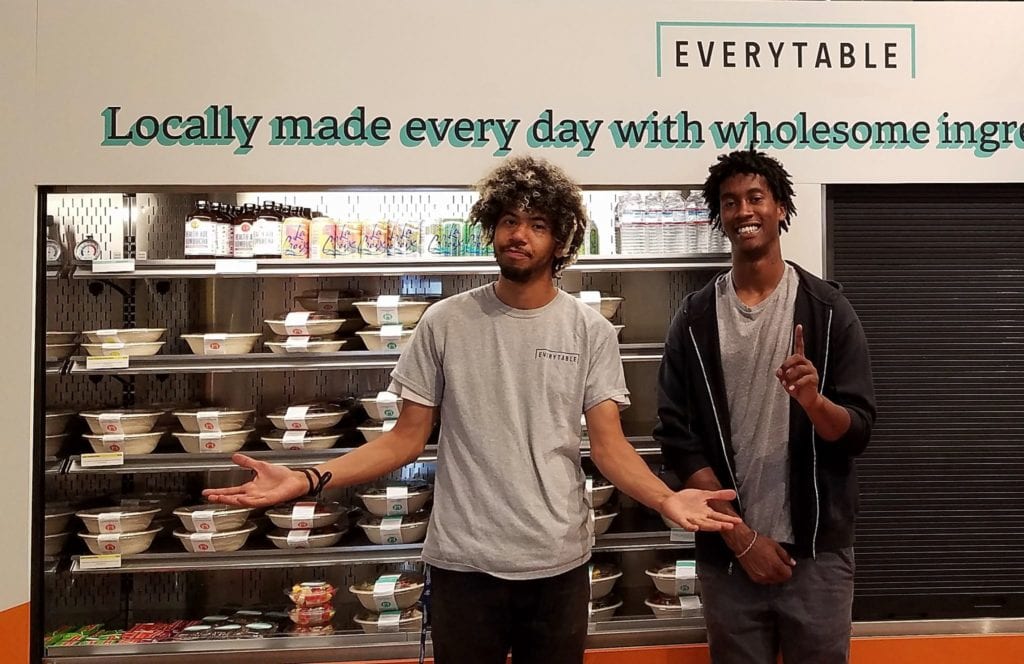 Everytable is registered as a “public benefit corporation,” which means its social mission is codified in its corporate documents, according to Foster. That status, he says, allows the company to weigh its social mission alongside shareholder interests when making business decisions.

But Polk and Foster have had to scale back their initial plans to open 10 stores by the end of 2017 as they work out kinks. One lesson learned: Finding the right person for the store manager position is critical. According to Foster, “it’s less about experience” and more about hiring someone with a “deep belief in what we’re doing.”

They found those qualities in Susana Cabrera, whose own struggle to stick to a healthy diet led her initially to a Groceryships support group, where she developed a taste for quinoa and lentils, and learned to substitute flavorful spices and herbs for oils and fats. Cabrera’s mother, father, sister and father-in-law all have diabetes, and she is keen to avoid the same fate.

Cabrera started out as a store lead making $13 per hour and now earns $15 as manager, which has given her a step up financially.

“Before we were on food stamps,” says Cabera, who has long dark hair and a radiant energy about her. She worked a street vendor selling hot dogs before joining Everytable.

“In the long term, I’m hoping to own my own business,” says Cabrera.

That’s the kind of ambition that Polk and Foster want to support with a franchising strategy that has the potential to build wealth in the community while also allowing the company to expand at a faster pace.

Food franchising as a wealth-building strategy for minority communities has its roots in the policies of the Johnson and Nixon administrations. The Small Business Administration made thousands of loans to African American entrepreneurs to open fast-food franchises in the early 1970s, according to Chin Jou’s Supersizing Urban America: How Inner Cities Got Fast Food With Government Help.

The number of minority-owned franchises grew from just over 400 to almost 2,500 in the early 1970s. But that increased investment in minority communities also helped fuel the epidemic of obesity and poor diet that is especially acute among Latinos and African-Americans.

“In 1965 — just a few years before the onslaught of fast food in inner cities — dietary surveys revealed that African-Americans were twice as likely as whites to meet dietary recommendations for fat, fiber, fruits and vegetables. By 1996, the opposite was true,” Jou told Pacific Standard. An Everytable in every community, as envisioned by Polk and Foster, could provide a quick and easy alternative to fast food.

Polk and Foster’s passion for economic empowerment is also in tension with the fact that food-service industry jobs are among the lowest paying in the country.

Polk acknowledges that $15-an-hour jobs can’t propel his employees into the middle class. But as much as they might like to offer higher wages to their employees—some of whom face barriers to employment – such a move would push up against Everytable’s goal of keeping meals affordable to members of their stores’ respective communities, Polk says.

Everytable often invites comparison to Locol, another evangelizing restaurant startup, that has locations in Watts and Oakland. But Locol’s model is quite different. Founded by celebrity chefs Roy Choi and Daniel Patterson, Locol has kitchens in each location. Everytable has one central kitchen, a cost-saving measure that makes it more analogous to Texas-based Snap Kitchen. Everytable, like Snap Kitchen, gives customers the option of heating up their food in microwave ovens located in each of its five restaurants.

Its grab-and-go format is not only convenient for customers. It keeps labor costs down and prices low. Everytable’s trade-off is the absence of the aromas and other attractions of an onsite kitchen. The kiosk format means “you need to educate the consumer” in order for them to fully comprehend the quality of the food, says Bryant, the Acumen America investor. Store employees have a “sample schedule,” says downtown store manager Rene Miranda on one slow Friday evening in August. She periodically roams the Macy’s Plaza courtyard with free food. Once a customer tries the meals, they can get hooked.

James Sumbi, a dispatcher for the Los Angeles Police Department, says he “almost exclusively” eats meals prepared by Everytable. On a Wednesday evening, he’s at the Baldwin Hills food court filling up his backpack with meals that will last him for the next few days. He’s “totally down” with the mission, but what brings him back is the convenience of a healthy meal. “I don’t like to wait,” he says.

Health enthusiasts like Sumbi are among Everytable’s avid supporters. That these customers comprise an important part of the customer base doesn’t worry Polk, who describes them as the early adopters. He says there was a big unmet need for healthy options in places like South Los Angeles, where the salads and vegan options are especially popular.

Bryant is working with Everytable to develop an impact analysis that will measure the health benefits of the business. Cabrera, the Hoover Street store manager, says she already sees how Everytable is making a difference to a range of community members who otherwise might not be able to score a good, healthy meal on the run.

There’s the mother of quadruplets who regularly picks up a Caesar salad to supplement the dinners she cooks herself; the survivor of a bypass surgery who stops by for his Chicken Tinga fix and the working mother who stocks up on squash spaghetti and meatballs for her high school-age daughter.

Cabrera, who is a trained as a “promotura” or health educator, has seen many people abandon healthy diets because of lack of funds. “I am happy to offer an option for individuals who want to make the choice of eating healthy,” she says.

How One Program Gives Federal Property to Groups Helping the Homeless