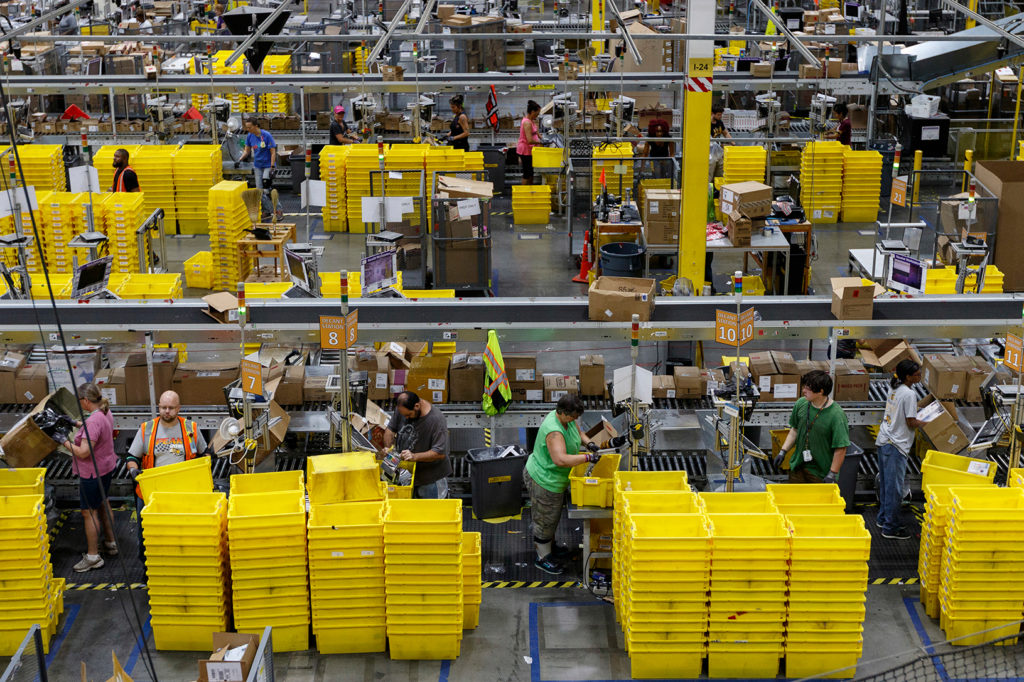 Justine Calma grew up in the 1990s near smog’s ground zero: The Inland Empire of California’s San Bernardino and Riverside counties, whose air quality still ranks among the worst in the United States. The region’s air pollution, according to a recent study, contributes to nearly 1,000 premature deaths per year in the San Bernardino-Riverside-Ontario region. One suspected culprit: The boom in warehouses and distribution centers built in the last decade that brings, along with an estimated 84,000 jobs, thousands of diesel-fueled truck deliveries daily and a host of chronic health problems for local residents.

Calma says that when she turned her pen on the silent crisis afflicting the region, she felt an added responsibility to “get it right.” The result is “Family Matters: The Town That Online Shopping Built—and Women Are Trying to Save It,” a revealing investigative report published by the online environmental magazine Grist. Calma documents the Sisyphean struggle of local activists to fight the power of industry and how they’ve managed to achieve real change against all odds. Calma, who specializes in environmental justice stories, spoke to Capital & Main about her work. The following interview has been edited for brevity and clarity.

Capital & Main: How did you first discover this story and what drew you to it?

Justine Calma: My story centers on a particularly vulnerable community, the west side of the city of San Bernardino, which has a higher pollution burden than the rest of the county. I grew up in the ‘90s among the warehouses, a little further away from [there] in Rancho Cucamonga. A lot of my friends’ fathers were truck drivers, and I remember playing in the front of big rigs. But I didn’t necessarily put two and two together until I was an adult. I started reporting on environmental justice and realized how deeply [our] community was affected. Every year I see the American Lung Association’s State of the Air report and consistently it’s found that San Bernardino is the county with the worst ozone pollution in the entire United States. And so I started looking into some of the health outcomes in the county and also found the elevated rates of infant mortality and low birth weights, which made me want to explore what some of the reproductive health repercussions could be from air pollution. That’s when I realized how this community is paying for our national shopping habit.

It seems that women, particularly mothers, are at the forefront of this activism. Is that because they are the ones given the responsibility to reproduce and they are fighting to protect that?

Oh yeah, definitely. Several of the moms I talked with actually expressed that a lot of their activism and advocacy has been out of the need to protect their children. [One] young woman I spoke with had a child that was born with gastroschisis and was part of a study that found clusters of that birth defect near transportation hubs. On top of that, in that west side community a lot of the mothers there don’t have a day job, necessarily. And so they’re in the neighborhood breathing the emissions all day long. That had popped up as one of the reasons why they may be bearing more of the pollution burden and also why they took it upon themselves and had some time to launch these campaigns.

How have the policies of the current White House affected these issues — do they embolden companies to pollute?

What’s going on nationally is going to have an effect on these communities even beyond the rollbacks of environmental regulations on these communities. When you’re talking about an immigrant community of color, they are challenged on multiple fronts. So, folks that are worried about immigration policies right now, that’s also going to affect folk’s ability to be more active.

But at the same time, for a lot of the women this is a very personal and localized battle, and they’ve been really smart and strategic — waging a battle on two separate levels. First, there are multiple smaller campaigns against each new development that crops up. So they form campaigns and file lawsuits against particular developments. Second, they also do some of the work around trying to push for a bigger policy to cast a larger net, because going after each individual [development] project becomes a game of whack-a-mole for them.

What has been the role of unions in the movement?

There has traditionally been this narrative spin that [says] it’s environmental protection versus economic growth. But I think what a lot of these advocates and mothers are saying is that it doesn’t have to be one or the other. They can have a greener economy, good jobs and a safe environment. They have found that it’s easier to work together around all of those issues. There’s a coalition of several labor [and] environmental groups, including the Sierra Club and the Center for Community Action and Environmental Justice, based in the IE, who are pushing for a community benefits agreement around the development of the Eastgate Air Cargo Logistics Center at the San Bernardino Airport. That would ensure things like local hiring, stable jobs and for the companies to green their operations. So, they’re really trying to tackle these things all together.

This Petri dish of environmental issues plaguing the Inland Empire is something that would seem to require decades of fighting. Or do you feel that, since change is starting to get traction, things will change more rapidly?

I’m hopeful because I see these women as agents of change, as they have been in the past. Of course, it’s come with some defeats, but they’ve had victories as well and I think there’s no choice. Online shopping has created an increased demand for these distribution centers that make delivery much faster because people [today] expect deliveries in a day or two. So, you’re seeing tremendous growth there and folks are going to have to escalate their campaigns. In the reporting I’ve done in many other communities, there’s typically multiple sources of pollution that are burdening one community.

That’s just a result of a lot of factors that marginalize predominately people of color and working-class folks and push them into these places that people with more power and privilege didn’t want to be around.

Are there any companies that have been receptive or been conscientious about the situation?

I think it remains to be seen. The Eastgate Air Cargo Logistics Center is going to be an interesting case. When I spoke with one of the developers, he said that they were open to having conversations about some of the community benefits agreement that the campaign is pushing for — like local hiring and electrifying their vehicles or taking other steps to mitigate the pollution. If they’re successful in implementing a community benefits agreement with that logistic center, which will be a major development, it would really set a precedent. It could be a model for any other developers that can and will pop up in the future.

Why do you do what you do? Why journalism as a whole and why environmental justice specifically?

I, in part, became a journalist because there wasn’t a whole lot of representation from the communities that I’m a part of when it comes to women of color or being a Filipino-American immigrant. And coming from the Inland Empire, we’re often in the shadow of Los Angeles. I’m just really glad to be able to shine a light in these places that other folks aren’t shining a light on or might not have my access or understanding of historical contexts. I also became aware of some of the issues around goods movement when I was living around the port of Long Beach. I developed allergies when I was living out there and the doctor told me it’s potentially a result of the air pollution. I also had an uncle who worked on a freighter ship, and we used to visit him when he would dock in the port of Long Beach, and he died early of cancer. So, thinking about these things made environmental justice a really important issue for me and something that I want to be able to tell a lot of stories in.