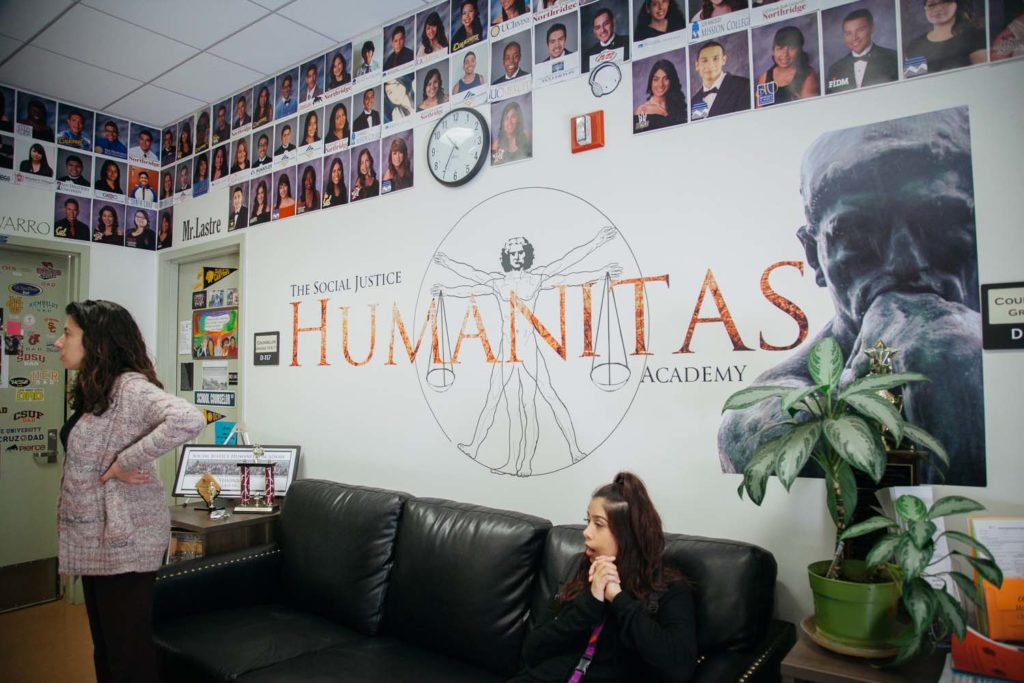 All photos by Joanne Kim.

Its successes have led growing numbers of education policymakers to see California’s community schooling movement as a holistic reform that can restore equality of opportunity.

It’s a Tuesday morning on the Los Angeles campus of César E. Chávez Learning Academies, and a classroom of upper-level high school students is standing in a large, inward-facing circle. Suddenly a wisp of a girl steps forward and, thrusting out her palms as if halting oncoming traffic, brings the gathering to a hushed silence. “I chose to honor myself this weekend by staying home and spending time with my family,” she declaims confidently before rejoining the circle.

“Did anyone notice what she just did there? That’s how you take command of a room,” principal José Navarro pipes up from his own place in the circle. Then, one by one, the rest of the kids take their turns at an affirmation, each followed by Navarro leading a constructive critique of their delivery. 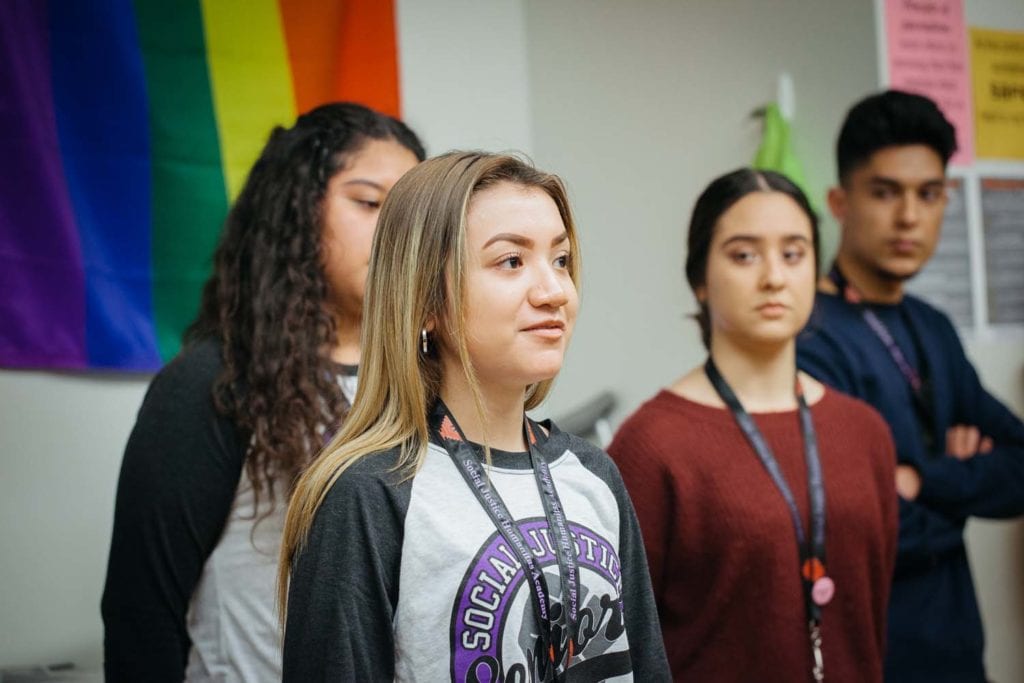 A Social Justice Humanitas Academy student responds to a question at a biweekly Council.

Welcome to a biweekly Council at Social Justice Humanitas Academy (SJHA) community school, a relatively recent addition to Los Angeles’ educational landscape. Part group therapy, part empathy- and trust-building exercise, the Councils are at the heart of a new, research-supported understanding of the profound role that healthy communities and school cultures play in children’s education.

SJHA is just one of a handful of community schools that have been dramatically closing opportunity and achievement gaps in some of Los Angeles Unified School District’s (LAUSD) toughest and most reform-resistant, high-poverty neighborhoods. Their successes have led community organizers and a growing number of education policymakers to see California’s fledgling community schooling movement as a holistic, bottom-up reform that can restore equality of opportunity and the democratic promise of the state’s system of universal public education.

There’s good reason for optimism, according to a December Learning Policy Institute meta-analysis of 140 community schooling studies. “[We] came out quite convinced,” report co-author Jeannie Oakes said by phone, “that not only community schools as a whole, but [their] components all made a positive difference in things like student achievement, attendance, behavior and graduation rates.”

Though the concept of community schooling dates back to the turn of the last century and John Dewey’s Progressive Education Movement, its modern form has just really come into focus in the last 20 years. Full-service community schools only became eligible for federal money in 2015 under Title IV of the Obama administration’s Every Student Succeeds Act. The good news is that though Title IV had been targeted for elimination by President Donald Trump and U.S. Secretary of Education Betsy DeVos, congress rebuffed the administration by giving a big boost to the block grants in the federal omnibus spending bill signed into law March 23.

Past federal policies, including No Child Left Behind and Race to the Top, pushed corporate-styled, top-down reforms such as high-stakes testing and draconian accountability schemes. Meanwhile, state leaders gambled that radical deregulation and competition from privately-managed charter schools would force low-performing, resource-starved neighborhood schools to either put up or shut down. True, charter schools have flourished, but research suggests that privatization merely “creams” gifted students who were already well positioned to succeed, while pushing out kids with the highest needs. 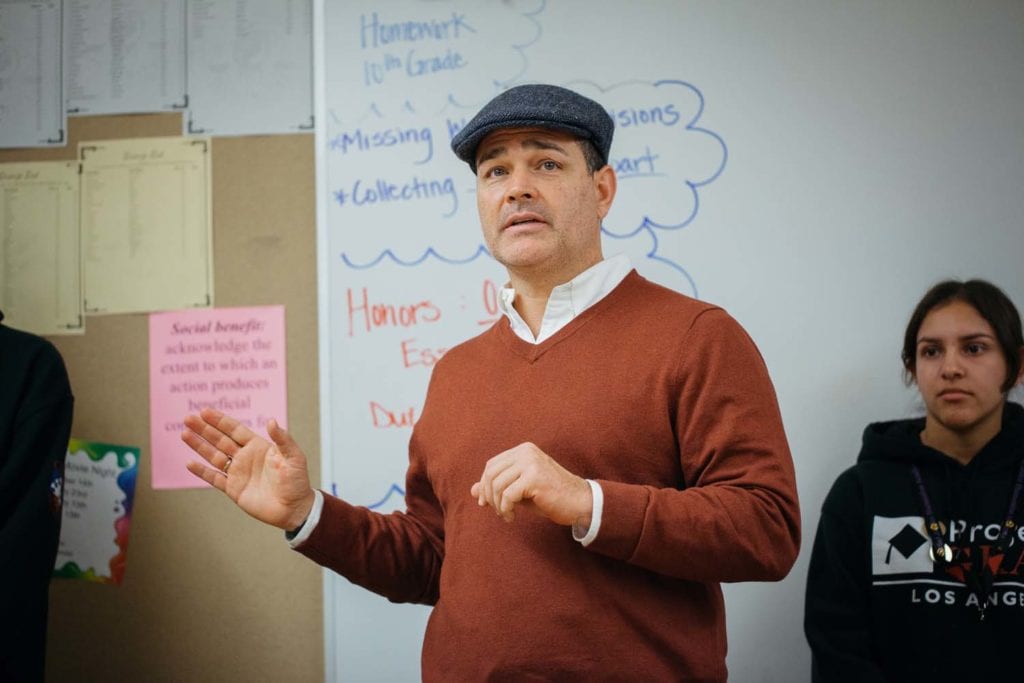 Social Justice Humanitas launched in 2011 as a “teacher-led” community school in partnership with the Los Angeles Education Partnership (LAEP), a Los Angeles education nonprofit that, with the Youth Policy Institute (YPI), Communities in Schools of Los Angeles, and the UCLA Center for Community Schooling, collectively account for 60 of the community schools currently operating in LAUSD. Thanks to a patchwork of foundation grants, partnerships and an on-site YPI community school coordinator, the César Chávez campus has become a hub for community support services, which is one hallmark of community schooling. LAEP also contributed the Humanitas curriculum, which it had developed as an interdisciplinary approach in which English, history, math, science and art lessons are linked around a common social justice theme.

On the same week that Navarro presided over SJHA’s Council, for example, the 10th grade had focused on ethical decision-making and, just upstairs from the Council session, desks in teacher Jael Reboh’s English class were pushed together into small discussion groups during a lesson on the Nazi victory in the German federal election of 1932 through the lens of Maslow’s hierarchy of needs.

The SJHA campus is located on the edge of a gritty, largely Spanish-speaking pocket of the Northeast San Fernando Valley. A mere three traffic lights to the east sits Pacoima’s San Fernando Gardens, the largest public housing project in the San Fernando Valley, which is still remembered for being a gang-infested war zone during the crack epidemic of the ‘90s. Social Justice Humanitas is currently 96 percent Latino, with just over 90 percent of its students qualifying for free or reduced lunches.

The neighborhood is also a place where homes typically lack the kind of early learning opportunities and enrichments that kids from more affluent communities take for granted — access to books, museum outings or adults who are able to read to them regularly. (A community scorecard issued the same year as SJHA’s launch gave the city of San Fernando a D for risk and a D for its schools.) In its seven years of existence, SJHA has raised its graduation rate from 83 percent in its first year to last year’s 99 percent graduation rate, with a 98 percent A through G matriculation rate with a C or better. During the same period, LAUSD’s graduation rate went from 67 to 80 percent. SJHA also outperformed the graduation numbers of its fellow pilot schools in the district and has more of its students matriculating into college.

“We’re ranked fourth in the district,” says Jennie Carey Rosenbaum, who joined SJHA as its community school coordinator and is now the school’s social-emotional learning initiatives director. “In a community with great poverty, it’s one thing to say, ‘Yes, yes you should go to college,’ and, ‘This is important’ — [but,] to constantly be saying that is sort of the counternarrative to everything they’ve heard in their lives.”

“I could have become entirely disinterested, disengaged and kind of weighed down by a lot of my personal life,” Vanessa Diaz agreed by phone. Diaz attended SJHA while in foster care before graduating in 2012 and going on to earn a degree in community and regional development from the University of California, Davis. “I feel like they see and treat students like the very best that they can be,” she said. “The education system right now is just so structured [around] criminalizing to black and brown communities and minorities, that this whole thing just really changed the game for me.”

In some ways, Social Justice Humanitas Academy, with its emphasis on teacher leadership, rather than on a more collaborative decision-making model involving parents, students and community partners, makes it a bit of an outlier in the movement. Yet it does share what most expect from community schooling: restorative justice; “whole-child” and culturally relevant, interdisciplinary teaching; family engagement; expanded learning opportunities; and on-campus wraparound supports that address basic student and community needs, including physical and mental health, financial literacy, housing assistance and legal support. “No kids get thrown away here,” declared parent Belinda Davenport by phone. “I worked as a volunteer aide in a Spanish class, where this one teacher has like 13 kids on [special education Individualized Education Program] IEPs. … They have kids that are on behavioral IEPs as well as academic, but no kids get suspended, no kid is labeled bad. They find a resource to help that kid be loved and supported.”

The sometimes staggering levels of commitment required for that kind of close attention is why much of the job of a community school coordinator involves taking the load off teachers by finding community partners that can provide the kind of crucial services and resources that more affluent kids get at home.

Still, José Navarro admits that his school had a nearly 40 percent faculty turnover between its first and second year alone. Of the 22 people who were part of the school design team when Humanitas was still a small learning community based at nearby Sylmar High School, a mere seven made the move to the César Chávez campus.

And that’s what worries people like the American Federation of Teachers’ (AFT) Sharon Delugach. (Disclosure: AFT is a financial supporter of this website.) Last summer LAUSD’s board voted to embrace community schooling and Delugach became part of an implementation team currently working with the board to define and systematize a scale-up of community schools within the district.

“They still have a UTLA contract, but they have more autonomies than traditional schools have,” Delugach says of pilot schools like SJHA. “One of the things about pilot schools is that teachers are just responsible for so much at a school site, way beyond their classes. I do know that it takes a toll — sometimes it’s really not sustainable.”

Ultimately the problem comes down to money. The LAUSD implementation team is calling for an initial start-up of 20 district-created community schools. By comparison, Oakland Unified, which has seven percent of LAUSD’s enrollment, operates 35 full service community schools. And New York City, which has a 45.5 percent higher enrollment than LAUSD, last year announced it was adding 69 new community schools, which will bring its citywide count to 215. But California continues to dwell in the cellar of national per-pupil funding — a persistent stinginess that many say has exacerbated an opportunity gap that this year earned the state a C in school finance, a D-plus in K-12 Achievement and a dismal 36th place finish in Education Week’s 2018 Quality Counts national performance report card.

For a high-poverty urban district like LAUSD, where declining birth rates, reduced immigration, gentrification and the expansion of charters have left neighborhood schools scrambling for resources, education researchers believe that community schooling offers the first meaningful bang for its buck in delivering equity for its highest-needs students.

“I used to live in Brentwood [on L.A.’s affluent Westside], right next to Kenter Canyon Elementary,” reflected Jeannie Oakes, “and when you look at that school, with the extra science programs, the after-school stuff and the parent engagement and all that, it looks quite a lot like the community schools that UCLA or the Social Justice Humanitas Academy would have developed just within this structure of a community school.”

“Poverty is not a learning disorder, but it’s real,” Navarro observes. “And it’s debilitating if it goes unmitigated. More money? It would really help. If my teachers were able to grade, plan and meet with students who are failing before they left the building at five, six o’clock, we’d get a better product.”