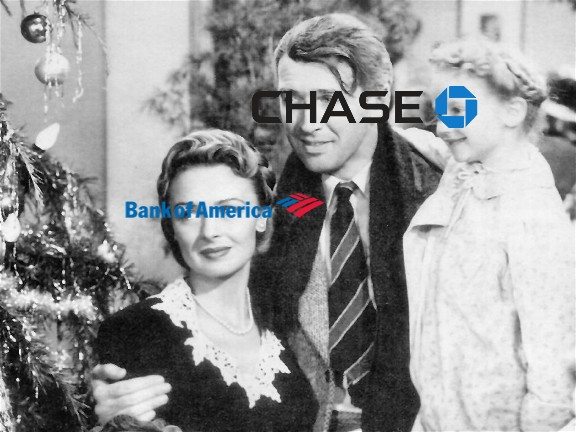 (This reposted feature by David Wallis originally appeared on the American Prospect.)

At a time when legislators, consumer advocates and the Occupy movement batter big banks for their questionable business practices, J.P. Morgan Chase and Bank of America have gone soft and fuzzy. The nation’s two largest banks are running saccharine television commercials that portray the massive multinationals as the Bailey Building and Loan Association.

In Brooklyn, tenants of a green affordable housing project partly funded by BoA gush over their sleek new apartments, replete with AC and electric keys. “No one can pick the lock,” notes a tenant in a web version of the ad. Another tenant, a formerly homeless girl about ten, says of her new digs: “I feel smarter.”

In Los Angeles, Richard Pink, one of the owners of Pink’s Hot Dog’s, recounts how BoA lent his parents $4,000 in 1939 to start their mom-and-pop shop. The Pink’s ad lays on the mustard pretty thick, using the condiment to spell “Pinks loves Bank of America” on a line of hot dogs. His parents, reminisces Mr. Pink, “just pleaded with their enthusiasm for this hot dog business. The branch manager said ‘all right, I will take a risk. I will take a chance with the two of you, and I will loan you the money to buy the property.’” (Today that banker would show the Pinks the door if they offered “enthusiasm’ as collateral).

BoA’s tearjerkers coincide with less inspiring news about the company. The New York Times recently reported that Small Business Administration-backed loans by BoA plummeted 89 percent from 2006 to 2010. Meanwhile, BoA ranked on the bottom of JD Power’s annual Small Business Banking Study. The U.S. Treasury just issued Bank of America, as well as JPMorgan Chase, poor reviews for their performance in a federal program intended to modify the mortgages of homeowners facing foreclosure. And the fallout continues from the bank’s much-maligned plan, since dropped, to charge a monthly fee to debit card customers.

Gene Grabowski, who specializes in crisis management at Levick Strategic Communications in Washington D.C., believes that the banks’ ads could pay dividends for the embattled companies. “People have been critical of banks since Old Man Potter shut down the Savings and Loan,” says Grabowski. “Does this really change the perception? No. But it does relieve some of the pressure from Capitol Hill and reminds consumers, ‘maybe banks aren’t all bad.”

A hearts and minds ad campaign might be a wily marketing strategy, but how about trying contrition and accountability? Imagine the commercials, which would cost little to produce. J.P. Morgan Chase’s CEO Jamie Dimon and Bank of America’s CEO Brian T. Moynihan face the camera in front of a plain backdrop. First, the CEOs thank the American people for the bailout. “You were there for us even though we have not been there for you,” admits each banker. Then Dimon and Moynihan apologize for their respective bank’s misdeeds and announce their immediate resignations. Fade to black.

Now that would be a holiday miracle.