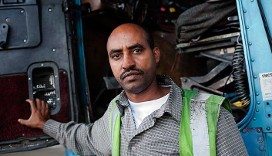 What is the trucking industry response to claims that port drivers are actually employees who have been stripped of their basic rights by trucking companies? Robert Digges, a spokesman for the American Trucking Associations, tripped on his own tongue on a CBS national news segment when he tried protesting the idea that trucking companies are cheating workers – and it’s getting picked up on blogs like the Daily Kos.

“They (trucking companies) believe they get a more productive employee – excuse me a more effective worker – a worker who is efficient, who has some skin in the game.”

So, the industry that dismantled the Los Angeles Clean Truck Program finally lets the truth slip: port truck drivers are actually employees who have had their rights stripped from them by greedy port trucking companies seeking to pad their bottom line.

“As long as we are independent contractors (the company) doesn’t have to cover benefits, they don’t have to cover sick days, bereavement leave time, holiday pay. It just saves the company money,” said Dutch Prior, a port driver for Shippers Transport in Oakland.

While the scheme is a boon for port trucking companies like Shippers Transport, a subsidiary of the giant SSA Marine (half-owned by Goldman Sachs), it’s drawing the attention of the Occupy movement and the Department of Labor.

“These (practices) have astronomical impacts on local governments, state governments and federal government and also hurts good, legitimate businesses that are playing by the rules and for employees that are being ripped off,” said Hilda Solis, the head of the US Department of Labor.

Last year the agency collected more than $5 million for nearly 8,000 misclassified workers, but with 300 new investigators on staff the Department of Labor will be looking more closely at misclassification schemes.

On December 12ththe Occupy movement is organizing a shutdown of the West Coast ports while the Occupy protesters in New York take their case directly to Goldman Sachs on the same day (Goldman Sachs – half-owner of SSA Marine – has its own checkered history with paying taxes. It’s easy to understand why the Occupy folks are targeting the company in the coordination with the port shut down.)

The CBS Early Show segment is only the latest in a series of investigative news pieces on the port trucking industry generally and on Shippers Transport in particular.

Salon.com interviewed Leonardo Mejia, a truck driver for Shippers Transport who works out of Long Beach. “Mejia is part of the shadow economy, though not in the sense that that term is commonly understood: as an autonomous netherworld entirely off the books and underground, invisible to the taxman and mainstream society. Mejia’s shadow economy is something a little different; purposefully created from the top down, its growth driven by employers increasingly eager to shed costly, legally mandated commitments to their employees.”

New laws will help port truck drivers and other employees who are purposely misclassified by their employers, but enforcement of new and existing laws is key. Without strict enforcement from government agencies an imbalance of power exists which keeps truck drivers under the thumb of the giant trucking companies like Shippers Transport.

“There’s an imbalance of power in the market which enables the big shippers to control the cost of shipping,” According to Dr. David Bensman, a professor at Rutgers University and author of “The Big Rig,” a report about misclassification in the port trucking industry. “And as long as you have that imbalance of market power you are going to have intense competition and substandard industry practices.”

(Editor’s Note: This post originally appeared on the Coalition for Clean and Safe Ports site.)

Don’t Discount This: Walmart Worker Issues Challenge to Her CEO

Retirement: Sitting on a One-Legged Stool