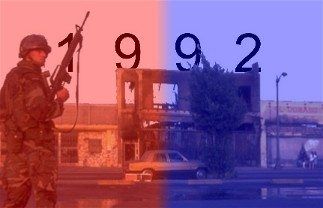 This month Frying Pan News is presenting personal stories of the April 29-May 4, 1992 explosion that has been called everything from a riot to a rebellion. These recollections do not represent the point of view of this blog or its sponsor, the Los Angeles Alliance for a New Economy. They do, however, present snapshots of a moment in a city’s troubled history — as well as opinions about how far we still need to go to make Los Angeles work.

Today’s post comes from Mike Davis, author of City of Quartz and Ecology of Fear. He teaches creative writing at U.C. Riverside.

A Tale of Two Riots

I was protesting at Parker Center when the Simi Valley verdict was announced. I spent the evening in South Central, talking to people and watching the fires. The next day I walked from my apartment in Angeleno Heights to Pico Union. There was looting and some arson (historic Andrews Hardware on Seventh Street, for instance) but no violence.

I had lived in the curfew area during August, 1965 so I had some eyewitness basis for comparing the two riots. The Watts Rebellion for the most part was a unitary revolt of black youth against police brutality and de facto segregation. The Rodney King explosion, in contrast, was a series of separate but simultaneous detonations: kids against police in the wake of Operation Hammer, a more or less targeted attack on Korean businesses, and a postmodern food riot that expressed the acute economic distress of poor Latino neighborhoods.

Or, to look at it from a slightly different perspective, it was an archipelago of events with specific local histories: In Compton, for instance, black and Latino kids burned down businesses owned by absentee black developers; in Latino Huntington Park, Cuban-owed businesses were trashed; and in Hollywood, persons unknown stole Madonna’s underwear from a Frederick’s display window. Several kids I interviewed at a gang unity event in Inglewood scorned the idea that the Rodney King beating was an instigation; they spoke instead of Latasha Harlins, the black teenager shot the previous year by a Korean storeowner — who was sentenced to probation rather than to prison.

I later wrote that the most important image of that week was actually taken the Christmas before: a Times photograph of thousands of women and children standing in the cold for a free handout of a chicken and a toy. L.A. had not seen such hardship since the late 1930s. But the impact of the recession on poor immigrant neighborhoods — the ultimate prime-mover of most of the looting — went otherwise unreported.

In contrast to the aftermath of the 1965 riot, which produced the whitewashing McCone Commission report that was followed by eloquent and fierce rebuttals, there was no official interest in unpacking the separate but convergent causes of 1992, or looking at the mass repression and violation of civil liberties that followed.

The only significant reflection was an ACLU report that showed that the majority of the arrestees were not African-African, and that most in fact had been taken into custody either north of Adams Boulevard or outside the city limits — facts that hardly support the dominant stereotypes of black gangs looting the city. The television news, reported from helicopters hovering at 500 feet or paraphrased from police spokespeople, was particularly egregious.

The failure to understand the real lessons of 1992 — especially the links between the revolt and the crisis of daily life in poor neighborhoods — ensures the possibility of a third iteration. “Rebuild L.A.” did not include jobs or significant public investment in the flatlands; the bursting of the real estate bubble meanwhile has erased the equity and savings of several hundred thousand working-class families. Although a reinvigorated L.A. labor movement won a series of important contracts and policy victories in the decade after the riot, momentum has slowed; the unions have again become mired in the swamp of Democratic intrigue and internecine warfare.

Progressives in L.A. and elsewhere need to be as uncompromising as the Christian Right. We must define a baseline human needs agenda and punish any politician who is not unwaveringly committed to the preservation and extension of that social safety net. No more Villaraigosas.

1992 Remembered: The Ecology of Riot